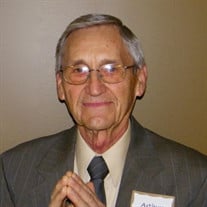 Arthur Simon Dahlhauser, age 93, died on February 18, 2021, at the home of his daughter-in-law, Nancy, in Greenbrier, TN. Visitation will be held at St. Joseph Catholic Church in Madison on Monday, March 1, at 10 a.m., followed by a funeral Mass at 11 a.m. A private graveside service for immediate family will follow at Spring Hill Cemetery. Arthur Dahlhauser was born in Whittemore, Iowa, on October 28, 1927, the twelfth of the 13 children of Peter J. and Josephine Elbert Dahlhauser. Art turned 18 in October of 1945, just after World War II ended. He enlisted in the US Army and served in Korea, reaching the rank of Staff Sergeant. Intending to become a priest, Art attended Loras College in Dubuque, Iowa, on the GI Bill. There he met Margaret Farrell, who was planning a religious vocation herself, and fate intervened. The two married in West Bend, Iowa, on August 18, 1951. They were inseparable in life and celebrated their 69th wedding anniversary in 2020. Art graduated from Indiana University with his MBA and began working as an accountant with General Electric in Bloomington, IN. A few years later he transferred with the family to Scotia, NY. When the youngest son, Paul, was 2 years old, the family of 12 was transferred to Scottsdale, AZ. In 1971 they were transferred again to the General Electric facility in Hendersonville, TN, where they put down roots. Art was “downsized” from General Electric in 1982 after 28 years of service. He decided to hit the books and get his CPA to be more employable. After several short job stints, he got on with the State of Tennessee, first working for the Department of Corrections and then in 1994 the Department of Agriculture. He loved traveling through rural Tennessee to measure grain levels in silos for the State and finding golf courses along the way. In 2003, just before turning 76, and after four years of saying, “I’ll retire next year”, he finally retired from the State to join his recently retired wife. For several years Art and Margaret kept a hobby farm near White House, TN, raising beef cattle, pigs, goats, chickens, horses, and peacocks. They had a large garden growing corn and potatoes and for several years grew tobacco. They bred Chow dogs as well. Until they sold the farm in 1985, Art’s favorite pastime was to ride up to the farm and “count the cows” while cracking open a “brewski.” The Dahlhausers bought a condo share in Gulf Shores Plantation in 1996 and formed a partnership with their children so that now four generations of Dahlhausers have continued to enjoy special vacations and family time there. The Dahlhausers started traveling abroad later in life including trips to Italy, Ireland and Austria. In 2002, they traveled to Medjugorje to visit the shrine there and the visionaries who saw the apparition of the Virgin Mary. This was a major inspiration in their lives. Their house was always overflowing at holidays with 50 people or more. They were happiest when celebrating the many graduations, marriages, new babies and christenings in the family. Art, who had played baseball in college, was a lifetime, long-suffering, die-hard Cubs fan, and the entire family rejoiced when then 89-year-old Art, along with four generations of descendants, was finally able to witness his Cubbies win the World Series in 2016. In the off season, he also found it in his heart to root for the Tennessee Titans. Art and Margaret took up golf together later in life in their early 70s. He was an avid golfer and played weekly with his wife. He kept all their scorecards and would recount the winning percentages in the annual Christmas letter. In 2013, on his last Dahlhauser family reunion trip to Iowa, they got out and played one of their final rounds of golf with their sons. Art was often remarked upon for his gift with numbers. He could recall even the time of day each of his 10 children was born. Part of his love of baseball was his love of statistics; he had invented his own form of Sabermetrics decades before anyone else. Sitting next to him at a game was a real education, as he would get a program and calculate strikeout-to-walk ratios and slugging percentages in his head. He also had an elaborate system of hiding money-filled Easter eggs for the children each year, numbering and charting each one of dozens, especially the one $20 egg, to make sure it did not go unclaimed. His final numerical statement was the number 18. Their wedding anniversary falling on August 18, Margaret preceded him in death three months later on November 18, 2020, and Art followed her exactly three months after that on February 18, 2021. He will be remembered as a fine, good, and honorable man who followed the Lord and loved his family. He raised his children to be good people and to value education. His steadfast marriage was an example to all who knew him. Art was preceded in death by his wife Margaret; three sons, Doug, Kevin, and Eric; by a beloved adopted daughter, Lisa Ratte; and by their daughter-in-law Rhonda Meservy Dahlhauser. He was the last of 13 siblings, his younger brother Marvin having passed away in December 2020, as well as older brothers Paul, Henry, Edward, Pete, James; and sisters Agnes, Helen, Jodie, Marie, Margie, and Angie. Survivors include his sister-in law, Bernadette Dahlhauser; children, Greg (Terri), Deborah Williams (James), Mary, Stephen, Bryan, Tom, and Paul (Glenda); and daughters-in-law Julie and Nancy. Grandchildren are Hart (Hillary), Hilarie Samei (Borhan), John (Debora), Justin (Kelsey), Michelle, Naomi Simmons, Nathan Jones (Ali), Jeremy Ratte (Angela), Saranna Cherry (Richie), Taylor Britt (Jimbo), Matthew, Samuel, Joel, Arin (Stephen Day), Jordan, Jennifer Knoll Salley, Andy, Lauren Heisler (Benjamin), Christopher, Ryan, and Thomas. He also has 19 great-grandchildren and one great-great grandson. In lieu of flowers, please donate to these causes he held dear to his heart: Camp Marymount: https://www.paybill.com/campmarymount/donation Adoration Hospice Foundation: https://bit.ly/3dDNbc4 Cubs Care: https://www.mlb.com/cubs/community/cubs-charities/donate

Arthur Simon Dahlhauser, age 93, died on February 18, 2021, at the home of his daughter-in-law, Nancy, in Greenbrier, TN. Visitation will be held at St. Joseph Catholic Church in Madison on Monday, March 1, at 10 a.m., followed by a funeral... View Obituary & Service Information

The family of Mr. Arthur Dahlhauser created this Life Tributes page to make it easy to share your memories.

Send flowers to the Dahlhauser family.