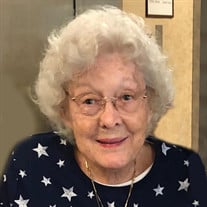 Barbara Anna (Bobbie) Martin, age 94 of Nashville, TN passed away February 25th at 11:40 PM in Nashville, TN. Born at what she always called “The Big House” in Sutherland, KY on March 27th, 1926, Bobbie grew up on the family farm and considered herself a tomboy much preferring working in the fields than in the house. Throughout her life she shared story after story with her friends and family about what it was like growing up at “The Big House”, and finally in 1999 with the help of son Richard, she wrote a 40-page book titled The Big House Memories. It was written for her children and grandchildren and is a terrific read. Growing up, she was a good student and very athletic playing tennis, and cheerleading. She often shared that it was love at first sight when she and her husband Bob met. She left The Big House when they were married at Panther Creek Baptist Church in Owensboro, KY in 1947, and after college in Bowling Green, they moved to Nashville, TN where Bob began working as an accountant. Randy, the first of their three boys was born in 1948, then in 1950 Richard was born and in 1952 Rodney was born. In 1954 after many summers traveling back and forth to Murfreesboro to finish her degree, she began teaching second and third grade students at Hendersonville Elementary School, where she retired 29 years later. She was an active member at both Riverside Baptist Church and New Life Baptist church where she taught Sunday School most of her adult life. Having come from a large and loving extended family, Bobbie carried on the tradition with her own, taking pride in hosting large and boisterous birthday and holiday family gatherings at the home she and Bob built in East Nashville. Her three boys were her pride and joy. She especially enjoyed taking them swimming, teaching them to play tennis and taking them to track meets. She recently penned some musings about raising her three sons which included the following: “As I look at my 3 sons that have made it to manhood, I’m very proud. Good looking, wonderful personalities and well-liked by their peers. Each has chosen a career that seems just right for them. I’m very proud of you my sons.” Bobbie is predeceased by mother Francis Anne Leet, father Hunter Addison Leet, sister Helen Smith and husband Robert Lee (Bob) Martin. She is survived by sons Randal Martin (Susan, Zan), Richard Martin (Eleanor), Rodney Martin (Melanie), grandchildren, Jason Martin (Mary), Aaron Martin (Ellen), Chase Martin (Carly), Sarah Martin (Jody), Jackson Martin (Laura), Abraham, Elias Martin (Kat), Nathaniel Martin (Christine), Andrew Martin (Anna), Joseph Martin (Amber), Hannah Martin, Naomi Martin, Jonathon (Taylor), great grandchildren Zach Martin (Alex), Myrla Salters (Aaron), Mariya Martin, Jed Martin, Odessa Martin, Macklin Martin, Magnolia Martin, Madison Martin, Finley Martin, Gilliam Martin, Cora Martin, Malachi Martin, Aine Martin, Josia Martin, Grace Martin, Rebeka Martin, Lydia Martin, Sarah Martin, Silas Martin, Elija Martin, Liam Martin, and great-great grandchildren Isaac Martin, Evalynn Martin, Ezra Martin, Elijah Salters, Ella Salters and Ophelia Rekosh-Martin. In lieu of flowers, donations can be made to New Life Baptist Church, 4809 Gallatin Pike, Nashville, TN 37216, Attention Pam McMullen. Graveside services will be private for the family. Arrangements by Spring Hill Funeral Home and Cemetery, a Nashville landmark since 1785 “Where Nashville Comes to Remember”

The family of Mrs. Barbara Ann Martin created this Life Tributes page to make it easy to share your memories.

Send flowers to the Martin family.