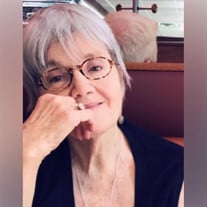 Barbara Jean Smith, age 83, passed away July 7, 2021 in Murfreesboro, TN. She was born in Nashville, Tennessee on October 31, 1937 which likely invigorated her life-long love of all things Halloween from her fabulous decorations, her joy watching children trick-or-treating, to her enchantment with old graveyards. Born and raised in Nashville, Barbara enjoyed photography, genealogy, and being outdoors, especially time visiting State Parks. Barbara was a talented artist in several mediums and was active in the Tennessee Art League in the past. After 40 years of service, Barbara retired from the Tennessee Army National Guard. She often shared how much she loved her job and how she felt the people she worked with were like family. Prior to her illness, she attended services at St. Ann Catholic Church in Nashville and before converting to Catholicism she attended Two Rivers Baptist Church for many years. Barbara was a fiercely independent soul and her sense of humor and tendency to get the giggles at inappropriate times will be fondly remembered. Barbara is preceded in death by her parents, Cullen and Elizabeth Felts, her sister, Judy Gilley, her nephew, Timothy Gilley and many aunts, uncles, cousins, and friends. Barbara is survived by her beloved cousins, Patsy (Bobby) Putman and Beverly (Fred) Wolfe, her daughter, Brandi (Michael) Hamilton, and her grandchildren, Drew (Simone) Hamilton and Lauren Hamilton, as well as other family. Barbara also leaves behind many friends that she made while living in New York since 2017 until she returned to Middle Tennessee in April of this year. To honor Barbara’s wishes, a graveside service will be held at the Historic Spring Hill Cemetery in Nashville on Friday, July 23 at 10 AM. Anyone wishing to attend is asked to meet at the funeral home at 9:30 AM. The family wishes to extend their gratitude to Alive Hospice and their support and comforting presence in her final days. In lieu of flowers, please consider a memorial gift to Alive Hospice or to Friends of Radnor Lake, where she and her daughter spent many afternoons hiking. Funeral arrangements entrusted to Spring Hill Funeral Home, 5110 Gallatin Road, Nashville. A landmark since 1780, "Where Nashville Comes to Remember."

Barbara Jean Smith, age 83, passed away July 7, 2021 in Murfreesboro, TN. She was born in Nashville, Tennessee on October 31, 1937 which likely invigorated her life-long love of all things Halloween from her fabulous decorations, her joy watching... View Obituary & Service Information

The family of Ms. Barbara Jean Smith created this Life Tributes page to make it easy to share your memories.

Send flowers to the Smith family.