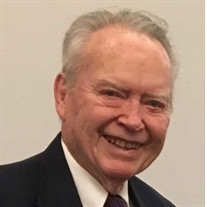 Bennie Lee Jones, father, grandfather, husband, and friend departed this life on February 16, 2021, in peace and in hope of the Resurrection. Ben was born on October 7, 1930 in Oklahoma City, Oklahoma. He is survived by his wife, Reva, his children Brad Jones, Bryan (Betty) Jones, Barbara (John) Slate, and Brenda (Brugh) Reynolds, along with his seven grandchildren and eight great-grandchildren. He was preceded in death by his first wife, Betty, and his parents, Ted and Eva Jones. Ben married his high school sweetheart, Betty, in 1949, and they were together until her death in 2016. Shortly after graduating high school, Ben sang in the Phoenix Opera Company. During his time in the US Fish and Wildlife Services, Ben and his family lived on ranches in remote corners of Arizona. Ben was a Sergeant in the US Air Force, where he taught a course about military aircraft engines. Once discharged from military service, he enrolled in college at Arizona State University. Ben’s years in Christian ministry began in 1958, when he co-founded the Arizona Student Bible Center. He was the volunteer director of the Center until 1969 while working full-time as Manager of Communications at Motorola in Phoenix, Arizona. Throughout that time, his home was open to many college students who needed a welcoming place to visit and a home-cooked meal. In 1961, Ben received an offer to join the Federal Bureau of Investigation from J. Edgar Hoover. He declined the job since it would have kept him away from his family for long stretches of time. In 1969, Ben moved his family to Madison,Tennessee to work as the Youth Director for Madison Church of Christ. As Youth Director he oversaw youth programming, including directing the summer camp program. In 1975, Ben was invited to work in an international missions program which printed and smuggled Bibles behind the Iron Curtain. This work continued under a program called Eastern European Missions, which was started a year later. During those years Ben traveled all over America to garner support for the program, and into many Eastern European nations. After 18 years, he retired and went back to family counseling. In 1990, Ben’s longtime friend Dr. Moses Akpanudo asked Ben to help with stateside fundraising for Obong University (also known as the University of Africa). For the next 14 years, he sat on the board of directors and worked to fund what is now a school, university and hospital in Obong, Nigeria. He also traveled to Obong Ntak to visit the school during this time. The entrance to the first gate on campus is named after him. Ben and Betty enjoyed performing in various commercials and advertisements. One of Ben’s most memorable was being the voice for Piggly Wiggly, “Down home, down the street”. His later life was filled by time with family and continued service to God as a faithful member of Rivergate church of Christ. Ben married his wife, Reva, in 2018. He enjoyed her companionship and their travels together. Known for his zealous faith, his gregarious personality, his warmth, and his love of singing, Ben lived a long, fruitful life of joy, hope, and love. He leaves a legacy that includes a large loving family, a decades-long ministry and marriage counseling practice, and many memorable stories. His fervor for advancing the Kingdom of God, even at 90 years old, resembles that of Caleb, who fought alongside Joshua to enter the Promised Land: “I, however, followed the Lord my God wholeheartedly. . .So here I am today, eighty-five years old! I am still as strong today as the day Moses sent me out; I’m just as vigorous to go out to battle now as I was then.” - Joshua 14:8, 10-11 The family will hold a private burial service at Spring Hill Cemetery in Madison, Tennessee. A celebration of Ben’s remarkable life will be held at Rivergate church of Christ, 201 Alta Loma Road, Madison, Tennessee, on Saturday, February 27th at 1:00 pm. Ben’s family is grateful for your prayers, support, and love. In lieu of flowers, the family requests donations be made to Obong University through the Tusculum Church of Christ, Nashville, Tennessee.

Bennie Lee Jones, father, grandfather, husband, and friend departed this life on February 16, 2021, in peace and in hope of the Resurrection. Ben was born on October 7, 1930 in Oklahoma City, Oklahoma. He is survived by his wife, Reva, his... View Obituary & Service Information

The family of Mr. Bennie "Ben" Jones created this Life Tributes page to make it easy to share your memories.

Send flowers to the Jones family.