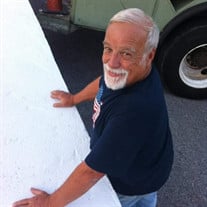 Click here to watch the service live http://webcast.funeralvue.com/events/embed_viewer/58787 Buddy “Band-Aid Man” Williams, passed away surrounded by his wife, kids and grandchildren on Wednesday, August 11, 2021 after a long 2+ year battle with cancer. He was born as Thomas Austin Williams, Jr. on November 21, 1949 in Nashville, Tennessee to Thomas A. Williams, Sr. and Maryann Oliphant Williams. He was preceded in death by his father. He is survived by his loving and devoted wife of 53 years, Ann Longhurst Williams, daughters Tammy Kelly (Michael) and Amanda Taylor (Neil), sisters Carole Burton, Joy Johnson, Laura Durham, and Brandi Daniels, as well as grandchildren Savannah Taylor, Austin Taylor, and Annabel Kelly. Buddy is also survived by a host of loving extended family and friends that have become family. From a young age, Buddy was a very hardworking and determined person. By the age of 19, he was married, serving his country in the United States Navy, and had a child. With Ann by his side, Buddy was able to make a way for his family. They restored a 100 year old home and were founding members of the Historic Lockeland Springs Neighborhood Association (LSNA). He wound up retiring from his position as an Engineer with Bellsouth at the age of 49. Although Buddy may have retired, he never stopped working. Buddy began delivering papers (just like he did when he was a boy), and then eventually purchased USA Motor & Machine, LLC with Ann. He ran the shop's daily operations until his illness in 2019. One of Buddy’s biggest passions in life was cars, but especially racing, which is where he came to be known as “The Band-Aid Man” after a young girl watched him crash during a race and exclaimed to her mother, “That poor car needs a Band-Aid!” Buddy, ever the jokester, took that and ran with it and at the next race he came back to win the heat race with a Band-Aid on his car. It wasn't long before that regular Band-Aid was replaced with a giant Band-Aid decal. That became his good luck charm, and thus the Band-Aid Man was born. Buddy was heavily involved in the local racing community, and over the years has helped and mentored countless racers. Needless to say Buddy loved racing, but even more than that, he loved his family. Everything Buddy did, he did for his family. His grandchildren were his world, and he was the best, most fun Papa ever, creating fun and unique memories with his grandchildren that will last a lifetime. Buddy impacted the lives of so many, and he will be greatly missed by all who had the great fortune of knowing him. A Visitation will be held at Spring Hill Funeral Home on Tuesday August 17, 2021 from 4pm-8pm. A Celebration of Life Service will be held on Wednesday August 18, 2021 at 2pm, with the family receiving visitors an hour prior to the service. Burial will follow in Historic Spring Hill Cemetery. In lieu of flowers, the family asks for donations in Buddy's name to either Camp Horizon (a unique children's oncology camp - www.camphorizontn.org) or to the Ebenezer Baptist Church (https://ebenezergreenbrier.com). Please also consider donating Blood or Platelets with the American Red Cross in his honor. Spring Hill Funeral Home and Cemetery has been entrusted with the final care of The Band-Aid Man. 5110 Gallatin Road, Nashville, Tennessee 37216. (615) 865-1101. “Where Nashville Comes to Remember.” thanks!

The family of Mr. Buddy "Band-Aid Man" Williams created this Life Tributes page to make it easy to share your memories.

Send flowers to the Williams family.