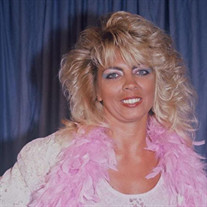 Candace Maria Rummel, 64, of Nashville, Tennessee, Passed away on Wednesday February 9, 2022. She was preceded in death by parents Mary and Harry Rummel. She is survived by her sister, Rose Moffett (Jeff), brother, Will and nieces Chloe and Brianna, nephew Payton, and great nephew Calab. Candi dedicated many years as head bookkeeper for the Club at Green Hills and their sister clubs in the Nashville Area. She was an extremely hard worker and know what it took to get things done. She was always there to help others. In 1980 Candi started her wrestling career as Candi Divine. During her career she made many friends in the business and saw a lot of the world. She held several titles including AWA World Women’s Championship, USWA Women’s Championship, UWF Women’s World Championship, WWC Women’s Championship among many others. She retired from the ring in 1998 but continued to make special appearances. In 1992 she received the LIWA “Honoree of the Year” award in Las Vegas. Those of you that knew her knew she was always there when you needed her. Although she may be gone from us, she will live on in our hearts forever. Candi had great love for both cats and dogs, and her family has requested that in lieu of flowers, donations be made to the Nashville Humane Society. To make a donation in Candi's memory, please click HERE[https://www.classy.org/give/241612/#!/donation/checkout] There will be a memorial service in Candi's honor in the future. Details will be announced to this obituary page once finalized. Below is a poem written for Candi by her sister Rose entitled "Entering the Ring": When entering the ring All shining and glimmering like a star In her beautiful costumes You can hear the whistling, clapping, and screaming of her fans Then when her opponent enters You can hear the hatred and booing sounds from the fans. Finally, it gets on the way But by no way is it for play She’s in there not only to do what she wants But also what her fans want When she’s down, she’s not for long For she has her fans to cheer her on She takes the bumps And gives the bumps She gets bruises, and sometimes bloody Which can be like a flood, but She’ll never quit. For in the end, the good old Sun-set flip, Will bring her victory To not just her, but also her fans Who love her dearly For she is my one and only Sister, Candi Divine, A legend in her time. Spring Hill Funeral Home has been entrusted with the final care of Ms. Rummel. 5110 Gallatin Pike S., Nashville, Tennessee 37216. (615) 865-1101. "Where Nashville Comes to Remember."

Candace Maria Rummel, 64, of Nashville, Tennessee, Passed away on Wednesday February 9, 2022. She was preceded in death by parents Mary and Harry Rummel. She is survived by her sister, Rose Moffett (Jeff), brother, Will and nieces Chloe and... View Obituary & Service Information

The family of Ms. Candace Maria Rummel created this Life Tributes page to make it easy to share your memories.

Send flowers to the Rummel family.