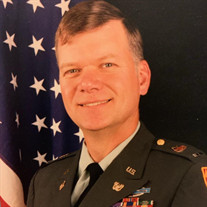 CW2 Delbert Ellsworth Jenkins II, 74, of Hendersonville, Tennessee, passed away on Monday, January 17, 2022. Born February 11, 1947 in Fairmont, West Virginia, he was the son of the late Delbert Ellsworth Jenkins and Mary Virginia Boring Jenkins. Delbert served his country proudly in the United States Army and retired as a Chief Warrant Officer after 22 years of service. He was awarded the Purple Heart and Bronze Star for his service in Vietnam. Mr. Jenkins would later go on to work for Trevecca Nazarene University and Lowes hardware stores. He was a hardworking ‘jack of all trades’ who could fix anything and was always willing to lend a hand. He was a longtime member of Grace Church of the Nazarene. In addition to his parents, he was preceded in death by his wife Katrina Anne Shinwell Jenkins. He is survived by his daughters Rebecca (Justin) Kropf and Elizabeth (Roy) Probus; stepchildren Robyn (Dan) Gilchrist and Karl (Vicki) Gumtow; sister Susan Fulmer; grandchildren Zacharie (Tiffany) Looney, Alyssa Looney, Tori (Zac) Williams, Abigail Probus, Timothy (Jackie) Probus, and Jessie Gumtow, Nicolas Kropf, Kaitlyn Probus and Matthew Kropf. A Celebration of Life Memorial Service will take place 12 PM noon, Saturday, February 12, at Grace Church of the Nazarene, 2620 Pennington Bend Road, Nashville, TN 37214. An inurnment service with military honors provided by the US Army will be held on Saturday, February 12, 2022 at 2 PM in the Veteran’s Section of the Historic Spring Hill Cemetery in Nashville. Arrangements entrusted to Spring Hill Funeral Home & Cemetery, 5110 Gallatin Road, Nashville, TN 37216. A landmark since 1780, “Where Nashville Comes to Remember.”

The family of CW2 Delbert Ellsworth Jenkins II created this Life Tributes page to make it easy to share your memories.

Send flowers to the Jenkins family.