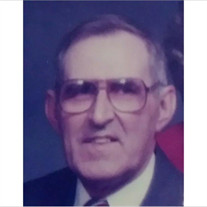 Douglas Mitchell Crabtree, age 91, of Madison, TN, passed away January 21, 2021. He was born August 3, 1929 in Gamaliel, Monroe Co., KY, to the late Abner and Ada Crabtree. He was preceded in death by his wife Rhoda Lee Short Crabtree, his... View Obituary & Service Information

The family of Mr. Douglas Mitchell Crabtree created this Life Tributes page to make it easy to share your memories.

Send flowers to the Crabtree family.