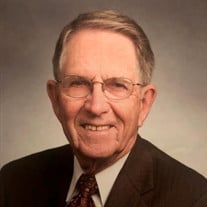 The livestream of the celebration of life service will be available on Monday, October 5, 2020 at 1 pm at the following link: https://youtu.be/OFx82ooaGwo Our beloved father, grandfather, and great grand-father was joyfully welcomed into his eternal home with The Lord, surrounded by his children on October 1, 2020 at the age of 91. Preceded in death by his wife and sweetheart Robbie H. Odom; his brother Richard A. Odom, and his parents, Douglas G. Odom. Sr, and Louise S. Odom, his brother-in-law, Larry England. Survived by son Larry (Kathy) Odom, and his family Angela (Tony) Rowland, Anthony, Savanah, and Dominic, Ainslie (Cole) Ellett, Easton, Cohen, and Hampton; daughter Teresa (Mike) Gann, and her family Ashley (Eric) Bright, Samuel, Eli, and Henry, Scott (Sarah) Nichols, Sadie, Bennett, and Grayson; and other daughter Debbie (Nathan) Massey, and her family Joey (Jessica) Pace, Xander, Meredith, Piper, and baby Pace, Ryan Pace, Mallory (Chase) Judkins, Leverett, Teagan Grace, and Camden; sisters, Judy (Ralph) Wilkerson, and June England, sister-in-law, Betty Odom, and many nieces, nephews, and cousins. Additionally, he always felt very blessed to have so many dear friends. He was very active in his life-long church, City Road Chapel United Methodist Church where he counted it a privilege to serve and have long-lasting friendships. He sat on numerous boards of professional, civic, and not-for-profit organizations. He was Co-owner with his brother Richard of Odom’s Tennessee Pride Sausage, Inc., a company started by his father and mother in 1943. He helped establish the Tennessee Independent Meat Packers Association and was former Chairman of the American Meat Institute in Washington, D.C. Doug was a genuine patriot who served two tours in the Marine Corp between 1946 and 1952 …“Semper Fi”. Doug loved to golf, fish, hunt, play tennis and cards. He and his dear Robbie enjoyed traveling and was able to visit many locations in America and internationally. A humble and faithful servant of God, he always considered that everything he had belonged to God and that his job was to be a good steward of it. He lived his life with this motto: To God Be The Glory! Visitation will be held at City Road United Methodist Church Sunday, October 4th, 2pm to 6pm. Celebration of Life Service will be Monday, October 5th at 1:00pm with one hour of visitation beginning at 12:00. Rev. Jay Voorhees will officiate. Serving as active Pallbearers will be: Scott Nichols, Joey Pace, Ryan Pace, Eric Bright, Tony Rowland, Chase Judkins, Cole Ellett . Honorary Pallbearers are: Living Word Bible Class and card buddies Dr. Bill Manning and Dr. R.K. Galloway. Interment will be at Spring Hill Funeral Home and Cemetery with Spring Hill handling the arrangements. Tributes may be made in his honor to: City Road Chapel United Methodist Church, 701 S. Gallatin Road, Madison, TN 37115 and Alive Hospice Nashville, 1718 Patterson Street, Nashville, TN 37203

The livestream of the celebration of life service will be available on Monday, October 5, 2020 at 1 pm at the following link: https://youtu.be/OFx82ooaGwo Our beloved father, grandfather, and great grand-father was joyfully welcomed into his... View Obituary & Service Information

The family of Mr. Douglas G. Odom created this Life Tributes page to make it easy to share your memories.

The livestream of the celebration of life service will be available...

Send flowers to the Odom family.