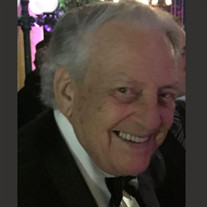 On the morning of March 15, 2022, Kersh Walters, Grandfather, peacefully fell asleep in the arms of Jesus, surrounded by family, at his home in Goodlettsville, Tennessee. He was 91 years of age. Elbert Kersh Walters, Jr. was born August 19, 1930, in Magee, Mississippi to Elbert Kersh Walters and Gladys Cornelia Styron. He was preceded in death by his parents and his younger brother, Paul Walters; he is survived by his younger sister, Mary Kesler; his wife of 29 years, Judith Jean Turner Peterson Walters; his two biological children, Elbert Kersh Walters, III (“Trip”) born February 21, 1955 and Sandy Sue Walters, born October 9, 1956, both of whom reside in California; his stepson Jeffrey Linn Peterson and his wife Shelly Lynn Peterson; and their children, twins Ashley Nicole Atwood, and her husband, Andrew Curtis Atwood and Austin Michael Peterson, and his wife Samantha Gail Peterson. Kersh attended Mississippi State University and received a BS in Business Management in 1952. Shortly thereafter, he joined the US Air Force during the Korean War and received 3 medals for his service. Upon his Honorable Discharge, he began a career as an executive in marketing and advertising in radio at various stations, moving frequently, and then became Vice President/co-founder of KIIS Broadcasting Workshop in Los Angeles and the Columbia School of Broadcasting. In 1988, while living in Omaha, Nebraska and working as the National Marketing Director for SilentRADIO, Kersh was introduced to Judy by mutual friends, Bruce and Elma Hart. A short time later, he moved to Portland, Oregon to take a position as Vice President with DAT Services and Judy followed shortly thereafter... After 4 years of dating, on January 2, 1993, in the presence of friends and family, Judy and Kersh were married in the home of Dick and Doris Denny in Dallas, Texas. They began their married life in Portland and stayed through 1999, when Kersh took a transfer to DAT’s only other corporate office located in Brentwood, where they could be close to their grandchildren, Ashley and Austin. Kersh retired a few years later and pursued his passion for helping others at various church and community organizations, including the Madison Campus Seventh-day Adventist church, the “403 Center” (a help center in Madison where he served for a time as Executive Director, as Chairman, and in various volunteer positions); the start-up Madison Medical Clinic for the working poor; and his HOA board among others. In addition to his significant time volunteering, he enjoyed his grandchildren, family gatherings, golfing and visiting. He will be sorely missed by his many friends, family, and the countless people he touched in our community. Services will be held this Saturday, March 19, at the Madison Campus Seventh-day Adventist Church located at 607 Larkin Springs Road, Madison, TN, with visitation at 2:00 p.m. and a service at 3:00 p.m. A celebration of life will be held in the fellowship hall following the service. In lieu of flowers, donations may be made in memory of Kersh Walters to the Adventist Community Center (“403 Center”), 403 Gallatin Pike S., Madison, TN 37115. Those that wish to view the webcasted service may follow the link below to the church's website: https://www.madisoncampus.org/ To view the tribute slideshow click the link below: https://www.tributeslides.com/tributes/show/JDZQXQXJSW985XK2

On the morning of March 15, 2022, Kersh Walters, Grandfather, peacefully fell asleep in the arms of Jesus, surrounded by family, at his home in Goodlettsville, Tennessee. He was 91 years of age. Elbert Kersh Walters, Jr. was born August 19,... View Obituary & Service Information