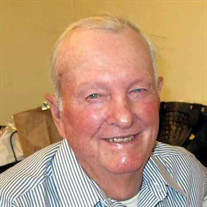 Gus “Jack” Richards, Jr., age 91 of Shelbyville, Tennessee passed away on Friday March 11, 2022. He was born on January 9, 1931 in Nashville, Tennessee to the late Gus Sr. and Georgia Mae Richards. In addition to his parents, he was preceded in death by his wife of 65 years, Rebecca Mills Richards and children Tami Richards, Jackie Richards, and Gus “Trey” Richards III. He is survived by his children Willie Richards, Georgia Richards and Troy Richards; several grandchildren and great-grandchildren; and a large, loving extended family. Jack was a loving, hard-working family man. He was kind, patient, and a man of his word. Everyone who met him immediately fell in love with his friendly spirit. From a young age Jack was a farmer, and was a farmer his whole life. He was known for growing turnip greens, okra, and lettuce, among other vegetables. He also loved livestock, especially horses and later in life, goats. In the early 1960’s he began raising and training Tennessee Walking Horses. He shared that love of horses with his children, and they carry that legacy on today. Jack loved his life on the farm, and would spend his relaxation time riding around on his John Deere tractors. He also took an interest in working with special needs individuals and providing them with work and mentorship on the farm. Jack was known and loved by many, and he will be missed greatly. A visitation will take place on Thursday, March 17, 2022 from 11 AM until 2:30 PM. A Graveside Service will follow at 2:45 PM in Historic Spring Hill Cemetery. Spring Hill Funeral Home & Cemetery has been entrusted with the final care of Mr. Richards. 5110 Gallatin Road, Nashville, Tennessee 37216. (615) 865-1101. “Where Nashville Comes to Remember.”

The family of Mr. Gus "Jack" Richards Jr. created this Life Tributes page to make it easy to share your memories.

Send flowers to the Richards family.