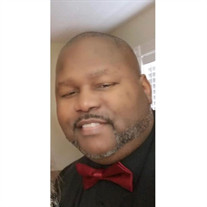 To view the livestream of Harry's Celebration of Life Service, please click HERE Harry James Warren, Jr. “Solo” was born October 27, 1978 to Harry James Warren, Sr. and the late Rose Marie Reese-Warren in Nashville, TN. He is preceded in death by his grandparents Robert and Frances Marie Reese, Sr. and Earl and Clara Bell Warren, Sr.; one daughter Kariyonna Warren, grandson Sidney (SJ) Jones, four uncles and his four legged fur baby, “Dunkin”. Harry was baptized at an early age. He received his education in Metro Davidson County School at Pearl -Cohn High School with honors. He continued his education at International Academy of Design and Technology. He was also employed as an independent contractor for Amazon. Harry was known to his family as Lil Harry, but to his friends, they called him “Solo”. He was a loving, kind, caring and very strong man who had a heart of gold. His scorpio demeanor was undeniable, you could tell by his addiction to his Jordans and fashion which was the key to his swag and if you knew him, you know exactly what that meant. Harry loved basketball, video games, but most of all, music. It was his escapte that helped him to ease his mind for hours at a time. Then we would see his smile that would light up the whole room. Harry loved his fur babies, Moma Six (SB), Jordan and Deuce like they were his children. Harry’s major health issues stated in the late 2010 and he continued to fight his illnesses everyday after that but through it all you would never know all that he endured on his journey. He touched the lives of everyone he met and will be truly missed. Those left to cherish his memories is his loving devoted wife Amanda Grace Henley Warren, daughter Kassandra Joyce Jones, granddaughter Karmen Janay Jones, grandmother Dorothy Talley Brodie, in-laws Samantha (Gary) Parker, one brother-in-law Jason Henley, one sister Lazetta Milliken Boone "Bootsie", two brothers Timothy and William (Wilma) Milliken, seven aunts, three uncles, four neices Comalitta Shannon, Kiara Milliken, Alexus Tucker, and Yazmine Tucker, one nephew Levoyne Milliken, dedicated cousins Sherita Hardy, Cedric Talley, Louis Woodard, and Sean Patterson, best friends Daryl (Tameka) Tucker, Tamesha Williams and Kristina Farris and a host of other family and friends. A Celebration of Life Service will be held Saturday, September 25, 2021, 3:00 p.m. in the chapel of Spring Hill Funeral Home. Visitation will be Friday, September 24, 2021 from 4:00-8:00 p.m. at Spring Hill Funeral Home, 5110 Gallatin Pike, Nashville, TN 37216, 615-865-1101, www.springhillfh.com. The family of Harry James Warren, Jr. wishes to express in our time of sorrow a deep appreciation and thanks of each comforting word, thoughts and concern shown during the passing of our loved one. We would like to give special thanks to TriStar Centennial Medical Center and staff as well as DCI Clinic and staff for all your love and support. We shall always be grateful to each and every one of you

The family of Mr. Harry James Warren Jr. created this Life Tributes page to make it easy to share your memories.

To view the livestream of Harry&#39;s Celebration of Life Service,...

Send flowers to the Warren family.