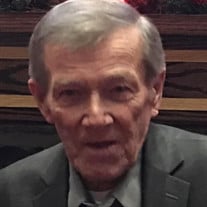 To view the Livestream of Mr. Kramer's Celebration of Life Service, please click HERE Mr. Jack Louis Kramer, age 80 of Gallatin, Tennessee passed away on Thursday December 30, 2021. He was born on October 21, 1941 in Crete, Nebraska to the late Louis and Myrna Kramer. In addition to his parents, he was preceded in death by his wife Diana Kramer, and brothers Richard Kramer, Ronald Kramer, Robert Kramer, and Roger Kramer. He is survived by his children Jacob Kramer (Deanna), Michael Kramer (Victoria), Sheri Kramer, and Sarah Kramer-Hawkins (Jeff), siblings Sherrie Broadhurst, Gloria "Jeannie" Toth, William Kramer, and Karen Hickox, special friend Becky Bullard, and a host of grandchildren, great-grandchildren, nieces, and nephews. Jack, or “Uncle Jack” as he was lovingly called by friends and family, was a very special person. He was kind, lovable, and never met a stranger. Jack was a faithful member of Hendersonville Church of Christ, and his faith was very important to him. He read his bible daily, and always started his mornings with a cup of coffee and a devotional reading. Jack proudly served his country in the United States Navy, traveling all over the world including Okinawa, Japan and Treasure Island in San Francisco. In his younger years, he enjoyed woodworking and furniture making, as well as fishing. He also loved playing cards and was unbeatable at Spades. A Celebration of Life Memorial Service will be held on Friday, January 28, 2022, 12:00 p.m. in the chapel of Spring Hill Funeral Home with visitation from 11:00 a.m.-12:00 p.m. Burial will be on Friday, January 28th at 2:00 p.m. at Nashville National Cemetery with military honors. Spring Hill Funeral Home and Cemetery has been entrusted with the final care of Mr. Kramer. 5110 Gallatin Pike South, Nashville, Tennessee 37216. (615) 865-1101. “Where Nashville Comes to Remember.”

The family of Mr. Jack Louis Kramer created this Life Tributes page to make it easy to share your memories.

To view the Livestream of Mr. Kramer&#39;s Celebration of Life Service,...

Send flowers to the Kramer family.