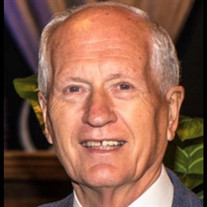 Jay Frederick Mick, 83, of Hendersonville, Tennessee, died January 11, 2022. He has lived in Mount Juliet, Tennessee, since 2019. Jay Mick was born May 17, 1938 in Dayton, Ohio, to Frank C. and Vivian L. (Forrest) Mick. He graduated from Henry Clay High School in Lexington, Kentucky. He continued his education at Trevecca Nazarene College and graduated from Middle Tennessee State University in Murfreesboro, Tennessee, with a BS in Music Education. Later Jay earned a Masters of Education from George Peabody College, in Nashville, Tennessee. Jay was retired from Nashville Metropolitan Public Schools in Nashville, TN where he was employed for 40 years. His entire career involved teaching students, teachers, and adults the love for music. The last 5 years of his career he was the Director of Music for all of Metro Public Schools, elementary thru high school. He had a love for teaching and was always so proud of his students and teachers. Jay was a member of the Church of the Nazarene for most of his life, where he served as the Minister of Music at most of the churches he attended. In his spare time Jay also had a very successful vacuum cleaning business, Jay’s Vacuum Cleaning Company, and worked as a sales representative for Vacuflo for 33 years. Jay will always be remembered for his positive attitude, his smile, his beautiful voice and love for singing, his kindness, his hard work and willingness to help anyone, and his gentle spirit. Jay had a love for his family like no other, especially his wife Burdene, his girls, and his grandchildren. He was proud of them all. His family was his hobby, and he worked hard to make sure they had everything they needed or wanted. He enjoyed playing games which he usually won, and camping with his family. Mostly Jay loved the Lord and supported missions wholeheartedly. Jay is survived by his wife Burdene (Potter) Mick, Susan M. Roeper (Ralph), Lisa M. Johnson (David); grandchildren, Lauren Johnson-Horn (Reid), Amanda Johnson, Ryan Roeper (Brittaney), Sydney Roeper; brother Reverend Richard J. Mick (Pauline-deceased); sister Jean Simpson (Silver-deceased), as well as a number of nieces and nephews. Preceding Jay in death were his parents Frank and Vivian (Forrest) Mick, his brother Lee Mick, sister-in-laws Pauline Mick and Geri Potter, brother-in-laws Silver Simpson and Milton Potter, niece Deborah Williamson. A Celebration of Life service will be held on Saturday, February 5, 2022, at twelve o’clock with visitation beginning at 10:00. The service will be held at Grace Church of the Nazarene, 2620 Pennington Bend Road, Nashville, TN 37214. In lieu of flowers the family are asking that donations be made to Grace Church Work and Witness Scholarships.

The family of Mr. Jay Frederick Mick created this Life Tributes page to make it easy to share your memories.

Send flowers to the Mick family.