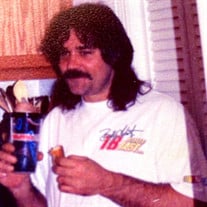 Jerry Dewayne “Monk” Maynard, Jr., 51, of Old Hickory, Tennessee, passed away on Saturday, April 10, 2021, at his home. Born August 21, 1969 in Nashville, Tennessee, he was the son of Denise Jones Maynard and the late Jerry Maynard, Sr. He is survived by his companion of 34 years and the mother of his children Pattie Dotson; children Rachael, Jerry III, and Andrea; mother Denise Maynard; grandchildren Destini, Seven, London, Sincere, Kylie, Marvin, Willow, Novella, Wayne, Kyle, Annabella, and Deacon; brothers Jamie and Tommy; sisters Monica and Victoria. Monk was a loving father and grandfather who loved his grandchildren dearly. If anyone told them ‘no’, his grandchildren would go to him and he would tell them ‘yes’. He called this “Pop’s house, Pop’s rules.” He was a self taught automobile painter and mechanic who restored older vehicles. He was also known to fix a bicycle or two. He enjoyed being in the outdoors fishing. He also enjoyed drag racing at Union Hill. A visitation will be held on Wednesday, April 21, 2021 from 4:00 PM until 8:00 PM at Spring Hill Funeral Home in Nashville. A Celebration of Life Funeral Service will be take place 12:00 PM Thursday, April 22, at the funeral home. The family will receive friends and visitors two hours prior to the funeral. Burial will follow in the Historic Spring Hill Cemetery. Arrangements entrusted to Spring Hill Funeral Home and Cemetery, 5110 Gallatin Road, Nashville, Tennessee. “Where Nashville Comes to Remember.”

The family of Mr. Jerry Dewayne Maynard Jr created this Life Tributes page to make it easy to share your memories.

Send flowers to the Maynard family.