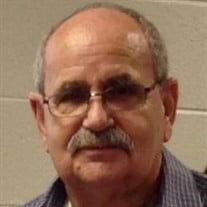 Mr. Kenneth Ray Scott, age 78 of Brentwood, Tennessee passed away on Saturday, January 22, 2022. He was born on June 7, 1943 in Chattanooga, Tennessee to the late Ernest and Ethel Scott. In addition to his parents, he was preceded in death by his brothers Paul Scott, David Scott, Franklin “Bill” Scott, WIlson Scott, and Gene Scott, as well as sister Louise Sheets. He is survived by his loving wife Marilyn Mathis Scott, son Mike Scott, daughter Shannon Arrington (Douglas), grandchildren Brenda Arrington and Noah Arrington, sister Cecil Teems, brother Bobby Scott (Debbie), many nieces and nephews, and a host of extended family and dear friends. Kenneth was a loving and compassionate man with a heart of gold. He had a wonderful sense of humor, and could talk to anyone. He always made people feel at ease and never met a stranger. Family was the most important thing in the world to Kenneth. He met the love of his life, Marilyn, during their Senior year of high school, and they were married the following year in 1965. Over the next 57 years they raised a beautiful family together. He was a proud husband, father, and grandfather and he always made sure his family knew how much he loved them. Kenneth was also a proud Tennessee football fan. His heart beat to the tune of Rocky Top, and he was an original Titans season ticket holder. Kenneth also enjoyed acting, watching Westerns, collecting celebrity autographs, and playing horseshoes. Kenneth was a special person who was loved by many, and will be missed by all who knew him. A visitation will be held at Spring Hill Funeral Home on Wednesday, February 2 from 11am-1pm. A Cryptside service will follow at 1pm in the Serenity Chapel Mausoleum on the grounds of Historic Spring Hill Cemetery. Spring Hill Funeral Home and Cemetery has been entrusted with the final care of Mr. Scott. 5110 Gallatin Pike South, Nashville, Tennessee 37216. (615) 865-1101. “Where Nashville Comes to Remember.”

Mr. Kenneth Ray Scott, age 78 of Brentwood, Tennessee passed away on Saturday, January 22, 2022. He was born on June 7, 1943 in Chattanooga, Tennessee to the late Ernest and Ethel Scott. In addition to his parents, he was preceded in death by... View Obituary & Service Information

The family of Mr. Kenneth Ray Scott created this Life Tributes page to make it easy to share your memories.

Send flowers to the Scott family.