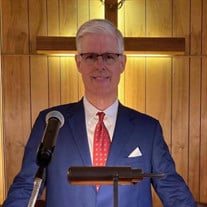 To view the livestream of Kevin's funeral service, click here. Rev. Kevin Christopher Crimmins, Sr. passed away on February 28, 2022 in Owensboro, Kentucky. He was born August 18, 1953 in Pittsburgh Pennsylvania. John and Lucille Crimmins delivered Kevin as the 8th of nine children. John was the General Council of the Koppers Company and was an award-winning Notre Dame Law grad. Kevin lived for the first 19 years of his life in Pittsburgh’s Squirrel Hill neighborhood attending Saint Bedes Parochial School in Point Breeze. He graduated from Central Catholic High School in 1971, and briefly attending Duquesne University. Kevin‘s life was blessed by the attention football coaches gave him from 7th to 12th grade. Football and wrestling taught him the meaning of hard work and competing in life. Playing in the first high school game in Three Rivers Stadium and competing in the Catholic High School wrestling tournament were highlights of his childhood. Kevin‘s life was changed in 1972 by his father giving him a book to read, Screwtape Letters by CS Lewis. This book prepared him for the transformation that occurred March 10, 1973 through the Overcomer Ministry on the campus of Indiana University of Pennsylvania. There he met the love of his life, Gemma Bartolomeo. They enjoyed 48 1/2 years together. Kevin went off to Covenant Foundation College in Greenfield, Indiana graduating in 1978. He completed a Master of Biblical Counseling Degree from a St. Louis Missouri school and completed a Doctorate of Religious Studies from Trinity Seminary in Newburgh, Indiana. Trinity channeled Kevin to another program at the Alfred Institute for Biblical Preaching Memphis, TN where Kevin became a Fellow. Kevin and Gemma spent 30 years in pastoral ministry in Colorado, California, Florida, Indiana, and Kentucky in two denominations, the Church of the Nazarene and the United Methodist Church. Worthington Chapel and Towers Chapel in McLean County, KY were his last three years of pastoral ministry. Kevin was grateful for his work with the Billy Graham Association. In 1996, John Wesley White came to New Castle, Indiana for BGEA and as a pastor in nearby Rushville, Indiana. Kevin participated in the crusade. When Kevin became a pastor in Arcadia, Florida and learned that they had a new convention center, he wrote a letter to the Billy Graham organization requesting Ralph Bell as an associate Evangelist who held a celebration crusade in 2003 that 7000 people attended in a town population of 5000. In Owensboro, Kentucky another new convention center was to open and Kevin wrote a letter to the Billy Graham organization requesting Will Graham, Billy‘s grandson. He came for a great celebration crusade effort in April 2015 opening the Owensboro brand new convention center. Kevin and Gemma raised four sons. Nathanael is a graduate of the Air Force Academy, who flies international for the United Parcel Service. Christopher and Rachel are in the essential oil business. Kevin Junior is a lecturer at UNC Charlotte and his wife, Kristy is a Pediatrician. Andrew is a pastor in Asheville North Carolina and his wife, Rebecca is a Nurse Practitioner. They appreciate having 11 grandchildren though they miss Micah, who passed away September 15 of 2008 at the age of three. In addition to 30 years of pastoral ministry, Kevin has served in the cemetery business for 20 years arranging over 7 million dollars in business, just completing his service to Rosehill Elmwood Cemetery Owensboro Kentucky for the last 10 years. Kevin is a Pittsburg Steelers fan and his grade school teammate, Danny Smith is now the special teams coach for the Steelers. The two miracles of his life are salvation through Jesus Christ March 10, 1973, and the dedication of his life September 15, 1973 to Gemma Crimmins, the love of his life. A Celebration of Life Service will be held on Saturday, March 5, 2022, 10:00 a.m. in the chapel of Spring Hill Funeral Home with his son, Rev. Andrew Crimmins officiating. Entombment will follow in the Serenity Chapel Mausoleum. His sons will serve as pallbearers. Visitation will be Saturday from 9:00-10:00 a.m. at Spring Hill Funeral Home. Memorial contributions may be made to https://goodnewsjail.org/give/ in Kevin’s honor. Arrangements entrusted to Spring Hill Funeral Home and Cemetery, 5110 Gallatin Pike, Nashville, Tennessee 37216.

The family of Rev. Kevin C. Crimmins Sr. created this Life Tributes page to make it easy to share your memories.

To view the livestream of Kevin&#39;s funeral service, click here.

Send flowers to the Crimmins family.