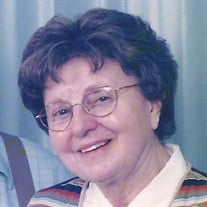 Mary Jo Wells (née Reed) of Madison, Tennessee, passed away on March 30, 2021. She was born on April 30, 1932 in Indianapolis, Indiana. After graduating from Thomas Howe High School, she attended Ball State Teacher’s College and graduated in 1954 with a BS in Art Education. In 1961, she earned a master’s in Art Education from Michigan State University. During college, she worked one summer at Estes Park YMCA Conference Camp in Estes Park Colorado, where she did a lot of hiking, including climbing Long’s Peak, an 18-hour round trip. From 1954-57 she taught art in White Plains, New York and spent one summer traveling all over Europe, England, and Scotland. Then from 1957-62 she taught art in Charlotte, Michigan. Mary Jo and Clayton met on a blind date and were married in August of 1961 in a Friends’ Society (Quaker) ceremony. They moved to their farm at 1322 N. Every Road, near Mason, MI, where they lived for more than 50 years and raised three children. As the kids got older, Mary Jo resumed making art, joined the Mid-Michigan Art Guild, and had pieces accepted in local juried shows. While travelling in the USA in their travel trailer, Mary Jo and Clayton bought a lot near his brother in Hot Coffee, Mississippi and parked the trailer there for some weeks in the winters. From 2006-2013, they spent two months a year at their condo in Port Aransas, Texas. In February of 2021, Mary Jo and Clayton moved to Madison, Tennessee to live closer to their daughter Shauna. Mary Jo was a thoughtful and considerate woman who personified the Golden Rule. She was very generous with her time and volunteered as a Girl Scout leader, Boy Scout leader, room mother and donated blood regularly. Later in life, she delivered for Meals-on-Wheels and helped drive people to medical appointments. In addition to her volunteer work, she also had a fun sense of humor and often sang “camp songs” to her kids, meaning songs she learned during the many years she participated in summer camps from junior high to college. Throughout her life, she attended many different churches: Presbyterian, Methodist, Friends’ Meetings, and the Unitarian Universalist Church. During later years, she enjoyed starting off her week with coffee and conversation with the Monday Morning Divas in Mason, MI. Family and friends feel fortunate to have one or more pieces of art that she made including watercolors, oils, pastels, carvings, sculptures, and multi-media pieces. Mary Jo is survived by her husband, Clayton H. Wells, and children Valynda Wells (David Howard), Carlton Wells (Kathy Wells), and Shauna Wells (John Fabke). She is also survived by grandchildren Rachel Wells, Clayton Wells II, Grace Lake (Justin Lake), Evan Howard, and Leslie Howard, and by great-grandchildren Wade Yelinek and Henry Lake, and by many other relatives and friends. In lieu of flowers, please send a donation to the American Red Cross.

The family of Mrs. Mary Jo Wells created this Life Tributes page to make it easy to share your memories.

Send flowers to the Wells family.