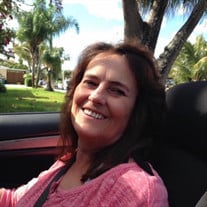 To view the LiveStream of Meshel's Celebration of Life Service, please click HERE Meshel Dawn Fields, 55 of Cookeville, TN, embarked into eternity on Tuesday evening, February 8, 2022. Meshel was born January 31, 1967, in Nashville, TN and was the middle of three children born to Sherry Fay Minor and James Winchell Fields. Later, she also had two younger siblings born to Sherry Fay Minor. Throughout her life, Meshel married twice and had three biological children: Adam Wade Arnold, Eric Cain Arnold, and Jacob Clinton Williams. During her first marriage, she gave birth to Adam and Eric and took on the full-time responsibility of raising her two younger siblings, the late Keith Gregory Perdue and Brooke Christine Perdue. In her second marriage, Meshel birthed Jacob and raised her stepchildren in addition to her biological children. She built a village with nothing more than hard work, selflessness and often times more than one job. In June of 2020, when Meshel was diagnosed with Stage 4 Pancreatic cancer, she was given 3 months to live, possibly 6 with experimental treatments. She feared nothing and took full advantage of the time she had left to be with her family and best friends such as Kay Cockrill, Frank Harrell, and many others. She traveled. She laughed. She danced. She prayed. She lived this way for 20 consecutive months after diagnosis. She made nothing but memories, not just for her sake, but also for those around her to carry with them after she was gone. Meshel lived a life full of struggle and perseverance. She was mischievous with a beautiful, contagious smile and would stop at nothing to help those she loved. Her genuine character truly demands the highest remembrance. She lived her life never putting herself first and would discreetly and voluntarily go without, so that others wouldn't have to. In her last couple of weeks, her decline was very noticeable, but Meshel still showed no signs of fear, only concern. Her concern was for her children, siblings, father and other close friends and family. She was at peace with her Lord and was courageous through the very end. Meshel is preceded in death by her mother, Sherry Fay Minor; stepmother, Tina Ann Fields; and her brothers, Van Sanford Fields and Keith Gregory Perdue. She is survived by her three children, Adam Wade Arnold, Eric Cain Arnold, and Jacob Clinton Williams; two siblings, Bryan Scott Fields and Brooke Christine Perdue; two stepsisters, Amy Leann Reeder and Lisa Ann Walker; four grandchildren, Brandon Clinton Williams, Aubrie Mychele Williams, Eden Rose Bortmas, and Briella Marie Arnold; and father, James Winchell Fields. A Celebration of Life Memorial Service will be held on Friday, February 11 at 12pm, with Brother Wayne Bess officiating. The family will receive visitors from 10am until the time of the service. Spring Hill Funeral Home and Cemetery has been entrusted with the final care of Ms. Fields. 5110 Gallatin Pike South, Nashville, Tennessee 37216. (615)865-1101. "Where Nashville Comes to Remember."

The family of Ms. Meshel Dawn Fields created this Life Tributes page to make it easy to share your memories.

To view the LiveStream of Meshel&#39;s Celebration of Life Service,...

Send flowers to the Fields family.