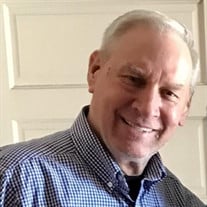 Michael Emmett Coursey, 76, of Hendersonville, TN, passed away on Sunday, February 21st of Covid-19. Mike was born on January 26, 1945 to Emmett and Marie Coursey of Savannah, Tennessee. He was the only son and older brother of two sisters Linda, who preceded him in death, and Tina, a resident of Arizona. He attended Central High School where he was a member of both the Football Team and the Marching Band. In 1971 he married Deborah Faith. Together they had two sons Brandon and Jeff. He was a loving husband and father who would do anything for his family. He would frequently travel for work only to return home exhausted but ready to coach a youth soccer team or attend a football game or band competition. He loved family gatherings and his home was always open to family and friends. No one was a stranger in Mike’s home. After many joyful years together, Debbie was diagnosed with cancer, passing in 2007. Mike was deeply saddened by the passing, but the same year he saw both of his sons marry. In June, Brandon married Tiffany Ingram officially joining the families which had been close for many years. In December Jeff married Deborah Hickey welcoming her family to the fold with open arms. In the wake of tragedy he found happiness in family and friends. In 2016, he was blessed with the addition of a grandson, Emerson. The family were active members of Lockeland Baptist Church, now The Church at Lockeland Springs, where they were thrilled to contribute in any way possible. Mike served as a Deacon, a member of the choir, played on the softball team with his sons, and countless other roles. He was fully devoted to his faith and his church, serving as a witness to many. In 2009 Mike married Brenda Holland, gaining not only a partner, but two sons, Jason and Robby, a daughter-in-law, Amy, and two grandsons, Seth and Jase. He loved being surrounded by family and was thrilled to expand his own later helping to welcome another daughter-in-law, Kaitlyn and a grandchild Jack. Very little in life made Mike happier than family, his love growing larger with each new member. Mike began attending Community Church of Hendersonville with Brenda, becoming an active member at Community, he also remained active at Lockeland, his love of God so big it took two churches to hold it. Mike never met a stranger. He could talk to anyone and frequently did. A vibrant and engaging storyteller, he had a story for any and all occasions. His ability to converse with anyone made him a perfect fit at Nashville Wraps. Mike was one of the original employees and traveled the country for trade shows where he could fully display his conversational and sales skills. He held several positions within the company over the years and loved them all. Mike was immensely proud of his part in the growth of Nashville Wraps. Mike was a man of many interests. He had a passion for cars. Classic or new did not matter, if it had tires and a motor he wanted to know more. He also collected baseball cards, coins and stamps. He loved dogs, and kids, spoiling both with love and attention throughout his life. He was a fan of many sports and proudly rooted for The Vanderbilt Commodores and the Tennessee Titans. He also enjoyed movies, good and bad, music and afternoon naps. He utilized the skills he learned as a child on the family farm to grow a backyard garden, which was much appreciated by the local wildlife. He also found joy in growing flowers and filling his little piece of the world with life and color. Mike is survived by his wife, Brenda Holland Coursey, four sons, Brandon Alan Coursey (Tiffany), Jeffrey Michael Coursey (Deborah Hickey), Jason Strader (Amy), Robby Florence (Kaitlyn), four grandsons Emerson Hickey-Coursey, Seth and Jase Strader, Jack Florence, one sister Tina Melhus (Steve), countless cousins, nephews, nieces, extended family, in-laws and friends all of whom he loved unconditionally. A private service for Michael E. Coursey will be held at 2:30 pm on Friday, February 26th at Spring Hill Funeral home in Madison. The service will be available to any who wish to participate via Zoom. The link and login information are available below. In lieu of flowers, donations can be made in memory of Michael Coursey to Community Church of Hendersonville, https://cchville.com, The Church at Lockeland Springs, https://lockelandspringschurch.com/, to assist both churches in Covid relief efforts within the community, or to the American Cancer Society at https://www.cancer.org/. Join Zoom Meeting https://zoom.us/j/8357462290?pwd=eHhZcktnc3lpaTQ2VndWNVlZRjVuQT09 Meeting ID: 835 746 2290 Passcode: Springhill

Michael Emmett Coursey, 76, of Hendersonville, TN, passed away on Sunday, February 21st of Covid-19. Mike was born on January 26, 1945 to Emmett and Marie Coursey of Savannah, Tennessee. He was the only son and older brother of two sisters... View Obituary & Service Information

The family of Mr. Michael Coursey created this Life Tributes page to make it easy to share your memories.

Send flowers to the Coursey family.