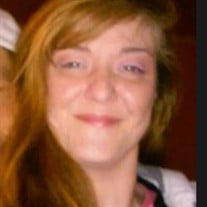 Michelle Ann Coffey, 45, of Nashville, Tennessee, passed away on Thursday, January 7, 2021. Born March 9, 1975 in Nashville, she was the daughter of the late Norman Farmer and Ann Gresham Farmer. Michelle was a loving mother, grandmother and... View Obituary & Service Information

The family of Mrs. Michelle Ann Coffey created this Life Tributes page to make it easy to share your memories.

Send flowers to the Coffey family.