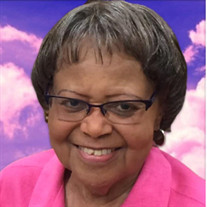 To view the livestream Click Here To view Entombment, please Click HERE Pansy Marie Mosley was born in Brooklyn, New York on August 4, 1931 to Esther Cooper. Shortly after her birth, John and Marie Mosley became her adopted parents, providing her with a loving home in Queens, NY. Her upbringing was like most girls of that age: she was raised to honor God, to be respectful of herself and others, and to work hard at tasks put before her. In those ways, Pansy was exceptional. She was educated in the New York City public school system and, given her high-spirited and outgoing personality, she was popular among all who came to know and love her. It was while at Jamaica High School that Pansy’s vivacious personality caught the attention of Henry Richardson, one of the most desirable boys in the school. Their courtship led to marriage right after graduation, in 1949. To this union were born three daughters: Marie Theresa, Brenda Agatha (deceased), and Laura Adele. The young family relocated to the Bronx, where they became a part of a supportive and loving community of friends that endures even to this day. However, tragedy struck early within the marriage as a result of Henry’s untimely death in 1957. Now a bereft and devastated young widow, Pansy, ever focused on the welfare of her children, and with the support of extended family, made the decision to realize the dream she and Henry had of home ownership by moving to St. Albans, Queens where, as a stay-at-home mother, she again became a part of a community of closely-knit friends who came to be looked upon as part of her family. Once her children were older, she ultimately entered the workforce, taking on a variety of jobs before settling on a career that was closest to her heart: supporting the health and welfare of children. Working within the Bureau of Child Welfare, Child Protective Services, Pansy, used her innate and finely tuned skills as a mother to work in and eventually supervise the agency’s group home unit, where children in need of the structure and nurturing of a stable home life were placed. Pansy was the perfect match for such an undertaking, and she excelled in this capacity, rising through the ranks, for more than 20 years. Pansy’s world would take an unexpected turn in 1988, when a chance reunion with an acquaintance from her past, then a recent widower, evolved into a tentative first date that sparked a whirlwind romance. Her suitor, Robert (Bob) Baskerville, became her husband on June 11, 1989, forming a blended family that now included Bob’s two daughters, Shelley (deceased) and Dawn. Shortly thereafter, grandsons EJ, Christopher, and Henry (deceased) completed the family, allowing Pansy the opportunity to relish her role as Nana. Pansy and Bob’s new life chapter inspired them to retire to Nashville, TN, where together they became part of a new community of friends, coworkers at the Nashville Police Department, and church family at Mt. Vernon Missionary Baptist Church, where Pansy quickly became an active and faithful member in the Mothers’ Ministry, the Women’s Ministry, and the Missionary Society. Her participation in ministry and her love of service to others brought her indescribable joy in her senior years. For the past 10 years, Pansy and Bob were residents of the Windlands East Retirement Residence, where Pansy’s social butterfly nature once again made her a popular and adored part of that community. While there, she enjoyed socializing, engaging in group games, and attending art therapy classes, where she created outstanding works of art. Pansy’s life there with Bob was simple, easy, and peaceful, and all who knew them saw them as two inseparable peas-in-a-pod. Her untimely transition from this earth occurred on January 19, 2021, when she succumbed to the devastating effects of infection by the COVID-19 virus. Although her struggle was short, her passing has left a massive void in the lives of those who loved her most, that will never be filled. Left to love and honor Pansy are her husband, Bob; her daughters, Marie, Laura, and Dawn; grandsons E.J. and Christopher; sister-in-law Theresa Price, nephews Michael Price (and wife Janice), Daniel Price (and wife Stacey); grand nieces and nephews Crystal, Brianna, and Gabriel; and a host of extended family and friends.

The family of Mrs. Pansy Baskerville created this Life Tributes page to make it easy to share your memories.

Send flowers to the Baskerville family.