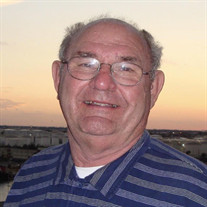 Colonel Raymond Eugene Woodson, 82, of Mount Juliet passed away on Tuesday, November 3, 2020 after an extended illness. He was born on September 10, 1938 in Nashville, TN, son of Robert and Ruby Carrington Woodson, both of whom preceded him... View Obituary & Service Information

The family of Colonel Raymond E. Woodson created this Life Tributes page to make it easy to share your memories.

Send flowers to the Woodson family.