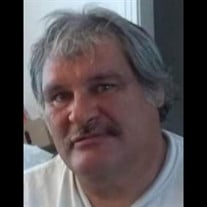 Beloved son and brother, Mr. Richard Kenneth Barnes Jr., age 53 of Nashville, Tennessee passed away on Wednesday January 26, 2022. He was born in Nashville on January 30, 1968 to Richard and Linda Barnes, and was given the nickname “Dicky”. Dicky was preceded in death by his father, Richard Barnes, and brothers-in-law Donald Stockton and Robert Pike. He is survived by his mother Linda Vaughn Barnes, siblings Ricky Barnes, Cathy Stockton, Sherry Hill (John), Lisa Barnes, Lorie McElhiney (Wayne), Susan Bain, Robin Pike, and Roger Barnes, girlfriend Genay Keener, as well as many nieces, nephews, and extended family. Dicky was a loving family man with a great sense of humor. He never met a stranger. He loved to talk and joke around, and his favorite way to spend his time was just “grilling and chilling” with his family. A mechanic by trade, Dicky loved to tinker with things, especially cars, and take something that was broken and make it work again. He enjoyed watching and attending NASCAR races, and he also loved music, especially country music. Dicky was loved by many, and will be dearly missed. A visitation will be held on Monday, January 31 from 4pm-8pm at Spring Hill Funeral Home. A Celebration of Life Service will be held on Tuesday, February 1 at 2pm, with the family receiving visitors one hour prior to services. Burial will follow in Historic Spring Hill Cemetery. Spring Hill Funeral Home and Cemetery has been entrusted with the final care of Mr. Barnes. 5110 Gallatin Road, Nashville, Tennessee 37216. (615) 865-1101. “Where Nashville Comes to Remember.”

Beloved son and brother, Mr. Richard Kenneth Barnes Jr., age 53 of Nashville, Tennessee passed away on Wednesday January 26, 2022. He was born in Nashville on January 30, 1968 to Richard and Linda Barnes, and was given the nickname &#8220;Dicky&#8221;.... View Obituary & Service Information

The family of Mr. Richard Kenneth Barnes Jr. created this Life Tributes page to make it easy to share your memories.

Send flowers to the Barnes family.