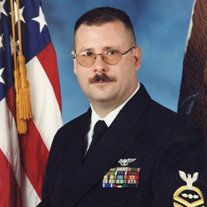 Mr. Richard “Rick” Wayne Lakebrink, age 56 of Nashville, Tennessee passed away on Thursday, December 2, 2021. He was born in San Diego, California on July 2, 1965. He was preceded in death by his mother Vivian Burgess Lakebrink. He is survived by his father Richard J. Lakebrink Jr., brother Richard D. Lakebrink, sister JoAnn Hines (Kevin), nephews Scott and Corey Lakebrink, Ashton Beardslee, and Logan Hines, as well as a host of extended family and friends. Rick was a loving and devoted son, brother, and uncle. He proudly served his country in the United States Navy, working in aviation. He achieved the rank of Chief Petty Officer, and retired after 23 years of service. After retiring from the Navy, he worked as an industrial mechanic for Metro Water Services. Rick was a family man, and whether it was riding motorcycles with his father and brother, or playing with his nephews, he loved spending time with his family. Rick also loved animals, and especially cherished his dogs. In lieu of flowers, Rick’s family has requested that donations be made in Rick’s memory to the Nashville Humane Society. Visitation will take place at Spring Hill Funeral Home in Nashville on Wednesday, December 8, from 4pm until 8pm. A graveside service with Navy Military Honors will take place at Middle TN State Veteran's Cemetery in Pegram on Thursday, December 9 at 11am. Spring Hill Funeral Home and Cemetery has been entrusted with the final care of Mr. Lakebrink. 5110 Gallatin Pike South, Nashville, Tennessee 37216. (615) 865-1101. “Where Nashville Comes to Remember.”

Mr. Richard &#8220;Rick&#8221; Wayne Lakebrink, age 56 of Nashville, Tennessee passed away on Thursday, December 2, 2021. He was born in San Diego, California on July 2, 1965. He was preceded in death by his mother Vivian Burgess Lakebrink.... View Obituary & Service Information

The family of Mr. Richard "Rick" Wayne Lakebrink created this Life Tributes page to make it easy to share your memories.

Send flowers to the Lakebrink family.