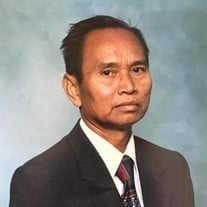 To view the Live Stream of Mr. So Sith's Celebration of Life Service at 12pm on Saturday, May 8, 2021, please click HERE Mr. So Sith, age 84 of Lebanon, Tennessee passed away on Friday, April 30, 2021. He was born on December 31, 1936 in Cambodia to the late Song Mom and Nop Chim. He was preceded in death by his six brothers, two sisters, and one son. He is survived by his wife, Sonan Nhem, his four children, one brother, and two sisters. Mr. Sith was the third child born into his family. Growing up, they were very poor and had to simply try to survive. However, he worked and studied hard and in 1955, he earned his Masters Degree. He began work in 1958 at Adigusonqdeba and in 1960 married Mrs. Sonan Nhem. Together they had a child, who then passed away, and they went on to have four more. In 1965 he began working at Ratanakiri, and in 1967 moved to another job at Antasorm Takeo. In 1970 there was a war and the family moved to Phom Phen. In 1979 the family moved to Sveysisophou, and then to a refugee camp in Thailand in 1984. In September of 1988 Mr. Sith moved his family to the United States where they lived in Houston, Mississippi, and finally settled in Lebanon, Tennessee. A Visitation for Mr. Sith will be held on Friday, May 7, 2021 from 3pm-7pm at Spring Hill Funeral Home. A Celebration of Life Funeral Service will be held on Saturday, May 8, 2021 at 12pm in the Chapel at Spring Hill Funeral Home, with the family recieving visitors one hour prior to the service. Burial will follow in Historic Spring Hill Cemetery. Spring Hill Funeral Home and Cemetery has been entrusted with the final care of Mr. Sith. 5110 Gallatin Road, Nashville, Tennessee 37216. (615) 865-1101. “Where Nashville Comes to Remember.”

To view the Live Stream of Mr. So Sith's Celebration of Life Service at 12pm on Saturday, May 8, 2021, please click [HERE]http://webcast.funeralvue.com/events/embed_viewer/53532 Mr. So Sith, age 84 of Lebanon, Tennessee passed away on Friday,... View Obituary & Service Information

The family of Mr. So Sith created this Life Tributes page to make it easy to share your memories.

To view the Live Stream of Mr. So Sith&#39;s Celebration of Life...

Send flowers to the Sith family.