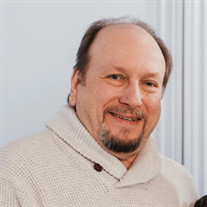 Stephen (Steve) W. Searcy, age 68, passed from this life into eternal rest on November 12, 2020. He was an exemplary husband and father, but first and foremost he was a life-long follower of Christ. He was known by all who knew him for his honesty, integrity, hard work, tenacity and for doing the right thing even when the right thing was hard to do. He was born in Nashville, Tennessee on September 13, 1952 where he lived the first 15 years of his life until his family bought a farm and moved to Sumner County. He graduated from Portland High School in 1971 and Middle Tennessee State University in 1975 and married Phyllis K. Scott to whom he was married 43 years until her passing and with whom he raised his family. His work took him to Flowood, Mississippi and Atlanta, Georgia where he lived for a few years before eventually returning to Sumner County. He resided in Sumner County until September of 2019 when he married his high school sweetheart, Janet Demonbreun, and moved to Brentwood. He made a career in the insurance and healthcare industry starting out with Pan American Insurance Company as a commissioned agent. He worked his way up the corporate ladder at Healthnet, HealthSpring, and Columbia HCA and held positions of Director of Managed Care at Nashville Memorial Hospital and at University Medical Center in Lebanon. He retired as a vice-president of Symbion Corporation. He also served on the Wilson County Chamber of Commerce and numerous professional healthcare organizations. He had a wide range of interests and hobbies including music, horseback riding, hunting, camping, and riding motorcycles. He loved animals and the outdoors. In addition to his first wife, Phyllis, he was also predeceased by his father, L.D. Searcy, paternal grandparents, Bluford Searcy and Russell and Lena Mayes, maternal grandparents, Harvey and Vader Ragland and his brother, Larry Searcy. He is survived by his wife of one year, Janet, twin sons Phillip (Heather) Searcy and Justin (Marta) Searcy, step-sons, David and Brian Bermúdez, grandchildren, Stephen and William Searcy, Elizabeth and Andrew Searcy, Michael and Leila Sargunas and Jackson Bermudez, mother, Dolores Searcy, sister, Lisa (Mike) Bennett, nieces, Brooke (Matt) Aldrich and Brittany Keith. Visitation will be at Harpeth Christian Church, 1101 Gardner Drive, Franklin, Tennessee on Sunday, November 15, 2020, from 2:00 pm until the time of the funeral service at 3:00 pm with Dr. Bobby Harrington officiating. Burial will be at 2:00 pm on Tuesday, November 17, 2020 at Spring Hill Cemetery, 5110 Gallatin Pike South, Nashville, Tennessee.

Stephen (Steve) W. Searcy, age 68, passed from this life into eternal rest on November 12, 2020. He was an exemplary husband and father, but first and foremost he was a life-long follower of Christ. He was known by all who knew him for his honesty,... View Obituary & Service Information

The family of Mr. Stephen Wayne Searcy created this Life Tributes page to make it easy to share your memories.

Send flowers to the Searcy family.