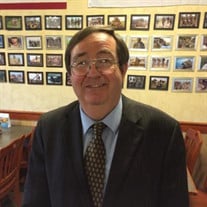 Mr. Steve Douglas Gibson, age 60 of Madison, Tennessee, passed away on Thursday, November 12, 2020. He was born on November 17, 1959 in Nashville, Tennessee to the late Curt and Mary Gibson. He is survived by his sons Curtis Gibson, James Gibson, and Matthew Gibson, as well as a host of extended family and friends. Steve was a lifelong student, always enjoying reading and researching, but he earned his formal education from Freed-Hardeman University where he achieved his Bachelor's Degree, and the University of Texas where he achieved his law degree. He was an attorney professionally, but he received the call to preach at the age of fifteen, and he preached his entire adult life. Steve was an interesting person with a collection of diverse interests and hobbies. He particularly enjoyed playing chess, and was highly skilled. He was the Tennessee Junior Chess Champion in 1974 at age fourteen, and was a nationally ranked player as well. He was a Nashville native with a musical family legacy. His father, Curt Gibson, played on the Grand Ole Opry, and he passed down that passion and talent for music to Steve, who in turn passed it down to his boys. Steve was a guitar player, songwriter, and a member of the Nashville Musician’s Association. Steve also enjoyed watching sports and playing basketball. He was also a massive fan of The Andy Griffith Show and was even a member of “The Andy Griffith Show Rerun Watchers Club” and his boys recall fond memories of Steve taking a situation that unfolded in their day and knowing the perfect Andy Griffith episode to watch that mirrored it. A visitation will be held on Thursday, November 19, 2020 at Green Hill Church of Christ (11706 Lebanon Rd, Mt. Juliet, TN 37122) from 4-8pm. A Celebration of Life Funeral Service will be held on Friday, November 20, 2020 at Green Hill Church of Christ at 11am with the family receiving friends for an hour prior. Burial will follow at Historic Spring Hill Cemetery. Spring Hill Funeral Home and Cemetery has been entrusted with the final care of Mr. Gibson. 5110 Gallatin Road, Nashville, Tennessee 37216. (615) 865-1101. “Where Nashville Comes to Remember.”

Mr. Steve Douglas Gibson, age 60 of Madison, Tennessee, passed away on Thursday, November 12, 2020. He was born on November 17, 1959 in Nashville, Tennessee to the late Curt and Mary Gibson. He is survived by his sons Curtis Gibson, James Gibson,... View Obituary & Service Information

The family of Mr. Steve Douglas Gibson created this Life Tributes page to make it easy to share your memories.

Send flowers to the Gibson family.