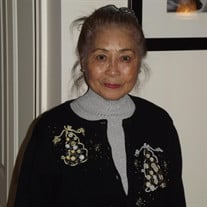 Tamai Takami Galloway, age 95 of Goodlettsville, passed away peacefully in her home on January 16, 2021. She was born to her parents Kangoro Takami (father) and Seki Takami (mother) in 1926. She is preceded in death by her brothers Takeo, Masao, Hideo, sisters Sonato, Shizue, and Sumie and her late husband, Hugh D. Galloway who passed in 2011. She is survived by one sister, Mamoru (Japan); her cherished children, sons Larry (Donna) Galloway, Alan (Donna) Galloway, and daughter Tyann Chappell; dear grandchildren Danielle (Eddie) Slaybinger, Nicole Galloway, Adam (Katrina) Galloway, Lindsay (Wayne) Zumwalt, Christopher (Romina) Graham, Crystial (Brandon) Stegall, Roxanne (Jared) Carl, Chad Galloway, Tori (James) Geraughty; and precious great-grandchildren Matias, Chloe, Harrison, Avery, Robert, John, Wyatt, Wesley, and Savannah. Mother was born in a small fishing village nestled in the hills of Noboribetsu, Hokkaido Japan. She loved to snow ski, go shelling on the beaches of Sanibel Island Florida, and to care and comfort her patients at St. Thomas Hospital where she retired after 38 years of faithful service. As much as she loved helping people, she cherished the true deep and loyal friendships that she made. She will miss all of her friends at the Goodlettsville Delmas Long Community Center and the Tuesday potluck lunches followed by bingo. Thank you, Jennifer, Linda, and Melody, for always taking such good care of her. She was also a member of the Red Hat Society and the Middle Tennessee Japan Society. Even though Japan was her birthplace she loved the United States and became a U. S. citizen in 1995 and voted every year except for the last two. In her later years when going to the beach was no longer possible, she would dream of her youth in Japan. She described what it felt like to take that first ski down the mountainous slopes after a fresh snowfall on a cold sunny morning with the sun at her back. After climbing to the top and looking down, the slopes appeared to be covered in diamonds glistening with indescribable brilliance. Then she would ski back down with the sounds and feel of the cold winter air wisping past her. As a little girl she would climb back up and ski back down over and over never tiring. As time went by that climb became more laborious and on her last day when she finally made it to the top of that mountain and looked below on that perfect pure white snow-covered slope, I feel she thought not this time, turned around and walked toward that brilliant Son. Mother was only love and grace. We want to thank everyone that was a part of her life; she loved each of you dearly. Due to COVID19 a Celebration of Life will be planned for a later date. If you would like to honor her life please make a donation to a local food bank.

Tamai Takami Galloway, age 95 of Goodlettsville, passed away peacefully in her home on January 16, 2021. She was born to her parents Kangoro Takami (father) and Seki Takami (mother) in 1926. She is preceded in death by her brothers Takeo, Masao,... View Obituary & Service Information

The family of Tamai Takami Galloway created this Life Tributes page to make it easy to share your memories.