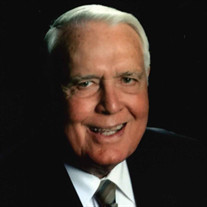 To view the Livestream of the Celebration of Life Service, please click HERE On Tuesday, November 17, 2020, William Wade (Bill) Manning passed peacefully from this life in his sleep after battling COVID-19. Born September 30, 1932 in Nashville, Tennessee, Bill was the second son of Elbert and Lillian Manning. He met Bette Jo Reding while in dental school at The University of Tennessee in Memphis and married the beautiful Memphis State coed in December of 1954. Their son, David (Betsy), was born in Key West in 1956, during Bill’s naval service on the USS Bushnell. The family moved back to Nashville in 1957, and daughter Sherrye was born in 1958. They eventually settled on the banks of the Cumberland River in Madison, where Bill set up a flourishing dental practice and they raised Tennessee Walking Horses for a number of years. Bill retired from dental practice in 1984 and served as the president and CEO of Delta Dental of Tennessee until his retirement in 1997. While he was an accomplished professional, dedicated community member, and loyal friend, Bill’s deepest pride and greatest joy was his family. In particular, he doted on his grandchildren, Brian Manning (Cassidy), Jennifer Batchelor (Jon), and Christopher Teague (Stephanie) while they were growing up—often to the amusement of their parents. A steady, wise, no-nonsense man who was rarely spotted in anything more casual than a polo and khakis, Bill patiently let his granddaughter play “beauty shop” for hours on his hair, crafting it into mohawks, horns, and one poorly-advised French braid. Everything from fishing trips to barbershop visits involved breakfast at McDonalds (he was a sucker for the hotcakes platter) and sleepovers regularly included a trip to Toys R Us, popcorn, and a Herbie movie that he always began snoring during by halfway through. When something was inevitably broken or damaged by the aforementioned grandchildren, he never scolded or punished. He simply winked and said, “I won’t tell if you won’t” and then helped hide the evidence. He videotaped every Christmas Eve and school performance (even if he did film someone who was definitely not Brian for the entirety of the 1990 fourth grade Tennessee play) and made country ham with “brains and eggs”—yes, they’re what you think they are—for breakfast every Christmas morning. He celebrated each game won and A earned, but his unwavering presence and constant encouragement always conveyed his unconditional love. Later in life, his eight great-grandchildren, Luke, Lucy, London, Nathan, Finn, Asher, Ellie, and Norah, brought him much joy. Granddaddy Bill, as they all called him, patiently introduced them to all the best fishing spots and—according to their enthusiastic reports (and Doritos-covered fingers)—he also brought the best snacks. He attended their ball games religiously, asked about their schoolwork, and was always the first phone call whenever a new tooth was lost. He is preceded in death by his parents, his beloved wife, and some dear golfing and card-playing buddies whom his family is confident he’s delighted to be reunited with. In addition to the family members enumerated here, he is also survived by his older brother, Buddy Manning. Bill’s family will be receiving friends on Saturday, November 21st from 10 a.m. - 1 p.m. and Monday, November 23rd from 10-11 a.m. at Spring Hill Funeral Home, 5110 Gallatin Road, Nashville, TN, 37216, to be immediately followed by a celebration of life service at 11 a.m. and burial at noon on Monday in Historic Spring Hill Cemetery. Arrangements by Spring Hill Funeral Home and Cemetery, a Nashville landmark since 1785 “Where Nashville Comes to Remember”

To view the Livestream of the Celebration of Life Service, please click [HERE]https://webcast.funeralvue.com/events/embed_viewer/41015 On Tuesday, November 17, 2020, William Wade (Bill) Manning passed peacefully from this life in his sleep... View Obituary & Service Information

The family of William Wade Manning DDS created this Life Tributes page to make it easy to share your memories.

To view the Livestream of the Celebration of Life Service, please...