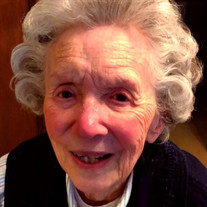 Lillian “Myrtle” Daugherty was born on September 15, 1928, to W.C. (Bill) and Lola Bertram Dabney in Wayne County, Kentucky and grew up happily in Monticello. She was a talented student, actor, and public speaker. She came to Christ at an early age and was active in ministries. After graduating from high school, she moved to Nashville to attend the University of Tennessee Business College. While there, she met Annie Daugherty, and the two became fast friends. Annie invited Myrtle to meet her brother Robert (Bob) Julian Daugherty, and the two quickly fell in love. Bob and Myrtle were married on September 4, 1948. and they enjoyed sixty-two years together. They had three children: Bob Jr., Peggy, and Janie. In their marriage, Bob and Myrtle were a team who served the Lord with gladness. Bob finished college at Belmont while pastoring Ramah Baptist Church in Watertown. They moved to California to attend Golden Gate Seminary where he pastored Burlingame Baptist Church. Myrtle worked at State Farm Insurance while Bob attended seminary. After graduating, the couple moved to Chickasaw, Oklahoma, and pastored College Heights Baptist Church. In 1961, Bob and Myrtle accepted the call to start a mission of Woodmont Baptist, Forest Hills Baptist Church in Nashville, Tennessee. They served at Forest Hills for fourteen years, meeting and loving people in Jesus’ name. The Lord stirred Bob and Myrtle once again in 1973 to go the foreign mission field of Japan. They served for the next fifteen years in Misawa, Kyoto and Tsukuba, Japan. They learned the language and worked to bring the love of Jesus to the Japanese people and the international community there. After retirement from the International Mission Board in 1989, they moved to Franklin, Tennessee. They loved opening their home to family and friends and made many happy memories with their grandchildren. Bob and Myrtle bought a farm and fulfilled their dream of becoming cattle farmers. They had joyful times together on their farm in Spring Hill, Tennessee. After an illness, Myrtle devoted herself to the full-time care of Robert. They moved to Mt. Juliet to be with their daughter, Peggy. Robert passed away in 2010. As a pastor’s wife, Myrtle used her abilities and talents. She spent endless hours typing Bob’s sermons, church literature, and church bulletins. She always worked in the church nursery or with older children and teens. No matter where they lived, they loved people well in Jesus’ name. Myrtle enjoyed cooking and worked tirelessly to provide countless meals to visitors from around the world. She was gifted in making people feel welcomed and loved. Her sweet personality and her love for the Lord made people enjoy spending time with her. Myrtle “adopted” young people as her own all along the way. Until her death, these “adopted” children called her mama. She loved and adored her family and friends. Myrtle was an avid reader and loved books from the time she was able to read. As a child, she would spend hours joyfully lost in books borrowed from an older cousin. Grace Livingston Hill, Jan Karon, and Janette Oke were some of her favorite authors, but her most cherished book was her Bible. The last verse she memorized at the age of ninety-three was Isaiah 41:13 which reads, “I, the Lord Your God, hold your right hand; it is I who say to you, “Fear not, I am the One who helps you.” Myrtle spent her remaining years with her daughter, Peggy, and son-in-law Pat Fannin. She was happy on the farm. She still served the Lord by baking bread for those who needed encouragement. Peggy, Pat, Maddy, Scott and Matt all cared for her. Myrtle sweetly and peacefully went home to be with her Lord on February 19, 2022, surrounded by her family. Preceding Myrtle in death were her parents, husband Robert Julian Daugherty, her sister Margaret Faith, her brother William Parker Dabney, her granddaughter Angela Jane Kough and her great granddaughter Abby Czirr. She is survived by Bob (Cynthia) Daugherty of Thompson Station, Tennessee, Peggy (Robert Patrick) Fannin Watertown, Tennessee, Janie (Scott) Holste of Fayetteville, Georgia, Bob (Gail) Gierhart, her “adopted” son, of Hawaii. Myrtle was also survived by Chris (Tanya) Pickens, Rob (Becky) Daugherty, Paige (Steve) Czirr, Leah (Wes) Bishop, William (Mary) Holste, Jon (Katie) Holste, Jeff (Ivonne) Holste, Robbie Gierhart, Charity Rothquel and Lance Gierhart. She had seventeen and counting great- grandchildren. She dearly loved her nieces, nephews, and cousins. Myrtle was an active member of Victory Baptist Church in Mt. Juliet, Tennessee. Her pastor, Dr. Chuck Groover, will officiate the funeral service. A visitation will be held on Monday, February 28th, 2022 from ten o’clock to eleven o’clock in the morning at Spring Hill Funeral Home. A celebration of life will commence at eleven o’clock in the morning with entombment to follow at Historic Spring Hill Cemetery. Pallbearers are Matthew Kough, Pat Fannin, Scott Wheeley, Stephen Kough, Pepper Bruce, and Rick Warren. Honorary pallbearers are Rob Daugherty, Chris Pickens, Jon Holste, Will Holste and Jeff Hoslte. To view the livestreamed service, please click the link here: https://webcast.funeralvue.com/events/viewer/69811 Arrangements have been entrusted to Spring Hill Funeral Home and Cemetery, 5110 Gallatin Road, Nashville, TN 37216, “Where Nashville Comes to Remember.”

Lillian &#8220;Myrtle&#8221; Daugherty was born on September 15, 1928, to W.C. (Bill) and Lola Bertram Dabney in Wayne County, Kentucky and grew up happily in Monticello. She was a talented student, actor, and public speaker. She came to Christ... View Obituary & Service Information

The family of Lillian Myrtle Daugherty created this Life Tributes page to make it easy to share your memories.

Send flowers to the Daugherty family.