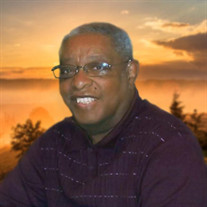 To View The livestream Click Here Robert Wilkins Baskerville, Jr. was born to Robert Sr. and Josephine Baskerville on January 12, 1934 in Brooklyn, New York. Robert, known as “Bobby” to his family and friends, enjoyed a happy and structured upbringing, enriched by close relationships with his older sister Jean (deceased), his many aunts, a beloved uncle, and scores of first and second cousins. Quiet by nature, he was reared to be God-fearing, gentlemanly, of integrity, and dedicated to his family. He also loved to tease, had a wicked sense of humor, and could talk for hours about issues that intrigued him. All these traits could still be used to describe him up to his final day. Robert was educated in the New York City public school system, where he displayed his exceptional athleticism in track and field from an early age. He attended Boys High School, then one of the most prestigious educational institutions for young men in Brooklyn. There, his prowess as a track star flourished. He was fast and he was disciplined, which made him a consistent champion sprinter, and a valued member of medal-winning relay teams at his schools and the Police Athletic League. His exceptional ability and passion for the sport was one shared by a young girl named Mildred Wilson, also a track and field phenomenon, whom he knew since grade school and who became his childhood sweetheart and ultimately his wife in 1955. From this union, which lasted 27 years before Mildred’s untimely death in 1982, were born two daughters: Shelley Diane (deceased) and Dawn Marie. Always a staunch family man and role model, “Uncle Bobby” was a favorite among his many nieces and nephews, and “Mr. Baskerville” was a respected voice of wisdom to scores of young men who valued his intelligence and non-imposing advice. Prior to marriage, Robert attended North Carolina Central University on an athletic scholarship, but left school to enlist in the United States Air Force in 1954, where he served as a radar specialist stationed in Utah and Alaska, and where he attained the status of staff sergeant before he was honorably discharged in 1957. After a series of meager jobs taken to support his young family, Robert’s skill in radar and forecasting earned him employment with the National Weather Service. There he honed his skills in meteorology, rising from the position of technician, to that of weather forecaster, accredited meteorologist, and ultimately, to being the City of New York’s sole Port Meteorological Officer, before retiring in 1989, after 34 years of government service. His inspiration for retirement came largely in the form of a lovely widow named Pansy Richardson, with whom he became reacquainted in 1988, after having met her decades before, through mutual friends. Robert, now a widower himself, was smitten from the start, and soon he and Pansy became an inseparable pair. A love affair ensued, resulting in their marriage on June 11, 1989, forming a blended family that now included Pansy’s three daughters: Marie, Brenda (deceased), and Laura. Shortly after, grandsons Earl Jesse (EJ), Christopher, and Henry (deceased) completed the family, allowing Robert, nicknamed “Bob” by his loving bride, to relish his new role as a grandfather. The couple retired to Nashville, TN, with the dream of spending their golden years together, enjoying the tranquility of southern life. Together, they became a part of a new community of friends, coworkers at the Nashville Police Department, and part of the church family at Mt. Vernon Missionary Baptist Church, where Robert’s reputation for organization and precision earned him an appointment as a church trustee. For the past 10 years, Bob and Pansy were residents of the Windlands East Retirement Residence, where their charming personalities and obvious devotion to each other made them a popular couple among both residents and staff. Although Bob was not as outgoing as his gregarious wife, he was a steady, captivating presence by her side at all events, attending to her safety, and observing the daily goings-on, for discussion during their private conversations later. They did everything together over the course of their 32-year union, even until the last, when, after his beloved Pansy preceded him in death on January 19, 2021, Bob soon followed, when he transitioned from this life on February 3, 2021. Bob was the embodiment of a special breed of man who always put family, duty, and honor above himself. In the lives of the many whom he positively impacted, he will never be replaced or forgotten. He leaves to mourn his passing daughters Dawn, Marie, and Laura; grandsons EJ and Christopher; first cousins Jocelyn Emery, Phyllis Hulen, and Stephen Booth; and a host of other cousins, beloved nieces and nephews, extended family, and treasured friends

The family of Mr. Robert W. Baskerville Jr. created this Life Tributes page to make it easy to share your memories.

Send flowers to the Baskerville family.