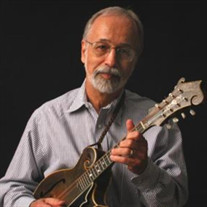 Roland White, age 83, passed away April 1, 2022 at Vanderbilt University Medical Center in Nashville, Tennessee following complications of a heart attack. Roland was born April 23, 1938 in Madawaska, Maine to parents Eric and Mildred White. He is survived by his wife and musical partner, Diane Bouska, sister Rosemarie Johnson, daughter Roline Hodge, son Lawrence Lee LeBlanc, grandchildren Shayla Jones and Austin Hodge and great-grandchild Zoe Jones. He was preceded in death by his parents, brother Clarence White, brother Eric White and sister Joanne Bierbrauer. Roland was a long time resident of Nashville where he enjoyed a long career in Bluegrass Music as a mandolin player, guitar player, vocalist and teacher. He was inducted into the Bluegrass Music Hall of Fame in 2017 and once again in 2019 as a member of The Kentucky Colonels. Roland started his music career as a teenager in Maine, playing country music with his siblings, Eric on bass, Clarence on guitar and sister Joanne singing. They sang and played at a variety of talent shows and assorted events in the early years. When he was 16, the family moved to California joining other extended family that had already made the move west. Eventually, after hearing a recording of Pike County Breakdown by Bill Monroe and The Bluegrass Boys, the brothers decided to pursue playing Bluegrass. The brothers created a sound based around Roland’s mandolin prowess, Clarence’s unique and innovative guitar style, and the singular vocal sound of sibling harmony. The addition of Billy Ray Latham on banjo and Leroy McNees on dobro and later, Roger Bush, on bass, completed the band. They had the good fortune of appearing on two early episodes of the Andy Griffith Show before Roland was drafted into the Army for a two year stint spent in Germany. After his discharge, Roland rejoined the group. During his absence, the group's name changed from The Country Boys to The Kentucky Colonels. The Colonels toured extensively in the early 1960’s, working coast to coast at a variety festivals and clubs and recorded several seminal albums that are still in print and venerated to this day. With Clarence leaving the group to join country rock band, The Byrds, Roland headed to Nashville where he went to work for Bill Monroe and The Bluegrass Boys, as guitar player and lead singer. Roland stayed for two years, from 1967 to 1969, recording nine songs while in Monroe’s band. In 1969, Roland returned to playing the mandolin, joining Lester Flatt’s band, The Nashville Grass, following the breakup of Lester Flatt & Earl Scruggs. During his tenure with Flatt, he was instrumental in bringing a 13 year old Marty Stuart to Nashville to work with Flatt. In 1973, Roland left Flatt to reunite with his brothers, Eric and Clarence as the New Kentucky Colonels. The reunion was cut short with the tragic death of brother Clarence on July 15, 1973. Roland continued after the painful loss of his brother, Clarence, as a founding member of The Country Gazette. The Gazette was a genre blending bluegrass group that over the years featured the talents of Byron Berline, Roger Bush, Alan Munde, Joe Carr, Mike Anderson, Gene Wooten and Billy Joe Foster. In 1989, Roland joined the well known group, The Nashville Bluegrass Band. He recorded five albums with the band that included two that received Grammy’s for Best Bluegrass Album, Waitin’ For The Hard Times To Go (1994) and Unleashed (1996). In the year 2000 Roland formed his own group, The Roland White Band, comprised of his wife, Diane Bouska, on guitar and vocals, Richard Bailey on banjo and Todd Cook on bass. A rotating cast filled the various instrumental positions in the band over the years including, David Grier on guitar, Jon Weisberger and Andy Todd on bass and Brian Christianson on fiddle. Roland’s mandolin style was firmly rooted in the tradition of Bill Monroe with impeccable rhythm and lead, yet he allowed his personality to shine through, imparting a unique and compelling style. His solos evoked a deft adherence to the melody while infusing his own sense of humor and playfulness in his note choices. His impact and influence reached far and wide. The news of his passing sparked hundreds of personal tributes on social media from around the globe. Friends and fans recalled his unfailing generous nature, on and off stage. When performing he would regularly share the spotlight, inviting youngsters, new faces and long time friends to join him on stage for a song or two. He generously shared his experience and knowledge with multitudes of mandolin enthusiasts across the country and abroad. Many reflected on how Roland welcomed them as new arrivals in Nashville and it was he who was the first to offer his endorsement in a town that can be daunting to a newcomer. Roland loved playing and was a stalwart performer as well as participant at jam sessions for years at The World Famous Station Inn where he also curated a yearly tribute to Bill Monroe as well as organizing benefits for fellow musicians in need. It was in this welcoming and generous spirit that certified Roland as a beloved Ambassador for Bluegrass Music and Music City. There will be a visitation from 3-7 PM on Wednesday, April 6th at Spring Hill Funeral Home and Cemetery, 5110 Gallatin Pike S. Madison, Tennessee. A Celebration of Life will be organized at a future date. In lieu of flowers the family encourages making a donation to the International Bluegrass Music Assoc. Foundation. Obituary written by Mike Bub 4/2/2022

The family of Mr. Roland Joseph White created this Life Tributes page to make it easy to share your memories.

Send flowers to the White family.