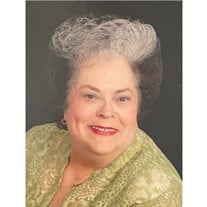 Angela Logan Beck, 87, of Nashville, TN passed away on Saturday, October 16, 2021. Born July 11, 1934 in Nashville, she was the daughter of the late George W. Logan and Lera Valuzet Logan. She graduated from East High School class of 1952. After graduating Baylor University and marrying Charles Beck together they joined First Baptist Indianapolis where she began developing her first drama ministry. In 1966 they moved to Nashville where they became members of Dalewood Baptist. Her ministry grew there as she oversaw the drama for the Singing Christmas Tree for 20+ years, and Living Pictures for 15 years. They were most recently members of Inglewood Baptist Church. She was a past board member at Davidson Academy, former 2 year President of the Belmont Aid, a member of the Medical Wives Auxiliary, East High Alumni planning committee, and many other organizations. In addition to her parents, she was preceded in death by her sister Joy Johnson; brothers Vernard Barkley and Bernard Barkley. She is survived by her loving husband of 65 years Dr. Charles B. Beck, M.D.; children Sheryl (CSM George D.) Gates, Keith B. (Carla) Beck, and Lisa Beck Brooks; brother George (Dorothy) Logan; grandchildren Keith Alan (Sarah) Beck, Stephen Kyle (Jessica) Beck, Michael Ryan (Lindsey) Beck, Nicholas Brooks, and Alyssa Brooks; great grandchildren Avenly Beck, Judah Beck, Hudson Beck, Lucas Beck, Amelia Beck, and one on the way. A visitation will be held at Spring Hill Funeral Home on Wednesday, October 27, 2021 from 4 PM until 9 PM. A Celebration of Life Funeral Service will take place on Thursday, October 28, at 2 PM at Inglewood Baptist Church 3901 Gallatin Pike, Nashville, TN 37216. The family will receive friends at the church two hours prior to the funeral. The service will be lived streamed on Youtube/Inglewood Baptist account. In lieu of sending flowers the family requests contributions to “The Chosen”, an 8 part TV series available online dedicated to the story of Jesus Christ’s 3 years of ministry through his death and resurrection. You can make a memorial gift in honor of Angela Logan Beck at this address: https://gofund.me/b22513c4. Arrangements entrusted to Spring Hill Funeral Home & Cemetery, 5110 Gallatin Road, Nashville, TN 37216. A landmark since 1780, “Where Nashville Comes to Remember.”

Angela Logan Beck, 87, of Nashville, TN passed away on Saturday, October 16, 2021. Born July 11, 1934 in Nashville, she was the daughter of the late George W. Logan and Lera Valuzet Logan. She graduated from East High School class of 1952.... View Obituary & Service Information

The family of Angela Logan Beck created this Life Tributes page to make it easy to share your memories.

Angela Logan Beck, 87, of Nashville, TN passed away on Saturday,...

Send flowers to the Beck family.