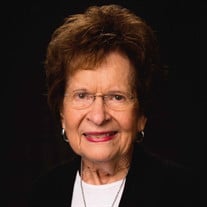 Anita Raines Elliott, age 84, of Madison went to her eternal heavenly home on February 9, 2021. She was a faithful servant of God, loving wife to J.D. Elliott for 51 years, devoted mother, grandmother, great-grandmother, and loyal friend. Anita was born on December 2, 1936 in Chattanooga, TN to the late Edmund and Bervie Raines. She adored her parents and was a self-described Momma’s girl. She left home to attend Vanderbilt University where she met Chuck Nelson at the Christian Student Center. She graduated with a Bachelors in Nursing and married Chuck a year later on the day before he had to report for Navy duty in Pensacola. Chuck became a helicopter pilot for the US Navy and they had two girls. While living in San Diego, Chuck and Anita helped build the Palomar Church of Christ in Chula Vista. Tragically, Chuck was killed during a training mission off the Northwest coast. With the help of her parents, Anita and her two girls moved back home to Chattanooga. Due to her strength and resilience and unwavering faith, Anita began to rebuild her life. Anita was hired to be the Assistant Director of Nursing at Erlanger Baroness Hospital by the then Assistant Administrator, JD Elliott. God had a plan for his servant, Anita. Anita and JD married and added a son. They relocated to middle TN and began a remarkable and happy life together. It was not without challenges, but JD was successful, and Anita was gracefully by his side. Together they served in many ministries at the Madison Church of Christ, Goodpasture Christian School, and in many community organizations. Anita had a servant’s heart. She visited the sick, took food to the grieving, taught Sunday School and Ladies Bible Class, volunteered at school, the hospital and senior citizen center, knitted for babies, and provided for the poor. Anita was generous in spirit and love. Over the years, Anita had many hobbies. She loved to sew, china paint, grow African violets and orchids, collect antiques and Heisey glassware, and travel. She even learned to play the dulcimer – for a time. Anita most enjoyed being a hostess. Everyone wanted to go to Anita and JD’s house for cards, food, and laughter. Anita’s greatest love was serving her family and friends. She created a warm Christian home where love abounded, holidays were celebrated, and friendships were nurtured. She was deeply loved and will be forever missed. “Her children arise and call her blessed; her husband also, and he praises her.” (Prov 31:28) Anita was preceded in death by her parents, Edmund & Bervie Raines; sister, Alberta Bridgman; first husband, LT Charles Thomas Nelson (USN), and second husband of 51 years, JD Elliott. She is survived by daughters, Michelle Arriola (John), Juanita Stewart (Jeff), and son, David Elliott (Debi), grandchildren, Jessica Arriola, Katie Sanchez (Jose), Emily Johnson (Kyle), Reed Stewart, Jorma Skeen (Miki), Adriann Skeen; great-grandchildren, Bennett & Zoe Johnson, Janie Kathryn Skeen, Jack & Leo Postlethwaite; sister-in-law, Virginia Ann Eley (Donnie); as well as many, many friends, all of whom she loved dearly. Due to Covid precautions, the family will hold a private graveside service. However, some family will be available for visitation on Saturday, February 13th, from 1:00 p.m. to 2:00 p.m. at Spring Hill Funeral Home, Madison, TN. In lieu of flowers, memorial contributions may be made to World Christian Broadcasting, 605 Bradley Court, Franklin, TN 37067-8200; or the JD & Anita Elliott Endowment for Teacher Excellence at Goodpasture Christian School, 619 Due West Avenue, Madison, TN 37115. Arrangements entrusted to Spring Hill Funeral Home, 5110 Gallatin Road, Nashville, TN 34216; (615) 865-1101; www.springhillfh.com

The family of Mrs. Anita R. Elliott created this Life Tributes page to make it easy to share your memories.

Anita Raines Elliott, age 84, of Madison went to her eternal...

Send flowers to the Elliott family.