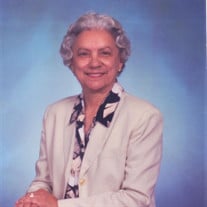 Dr. Audrey Yvonne Eubanks Lewis, EdD, age 96 of Nashville, Tennessee passed away peacefully on Monday, November 23, 2020. She was born on July 1, 1924 in Chicago, Illinois to the late Horace and Marjorie Eubanks. In addition to her parents, she was preceded in death by her loving husband Dr. Edward C. Lewis, Jr. and her brother Horace Eubanks. She is survived by her daughters Geri Johnson Osby, Lynn C. Lewis, and Yvette L. Bose (Eric Sr.), grandchildren Edward Johnson, Derek Johnson (LeTisha), Eric Bose, Jr., Audrea Bose, and Louis Bose, great-grandchildren Miles, Maddie, Brayden, Cameron, and Grayson Johnson, nieces Karen Neely and Diane Hauffen (Exxes), great-nephew Martez Hauffen, sister-in-law Hilde Jimenez, cousins Sharon Williams and Adekola Adedapo, and her lifelong best friend Earline Hudson, plus many other relatives and friends. Audrey was a vivacious, free spirited individual. She was a professor of Health and Physical Education at Tennessee State University for thirty years, where she retired as the department head. She was a longtime member of the Alpha Kappa Alpha sorority, as well as the Episcopalian Daughters of the King. She especially loved her church, Holy Trinity, and its members. In her free time one of her favorite pastimes was playing bridge. She was very good and played in tournaments with her husband Edward. After his passing, she continued playing bridge with her best friend Earline. She also enjoyed traveling, visiting exotic places around the world including India, China, and Egypt. She stayed active, even up in her later years, and enjoyed walking for her health. At this time, no services are being held for Dr. Lewis. The family will plan a memorial service in 2021. Spring Hill Funeral Home has been entrusted with the final care of Dr. Lewis. 5110 Gallatin Road, Nashville, Tennessee 37216. (615) 865-1101. “Where Nashville Comes to Remember.”

Dr. Audrey Yvonne Eubanks Lewis, EdD, age 96 of Nashville, Tennessee passed away peacefully on Monday, November 23, 2020. She was born on July 1, 1924 in Chicago, Illinois to the late Horace and Marjorie Eubanks. In addition to her parents,... View Obituary & Service Information

The family of Dr. Audrey Yvonne Lewis, EdD. created this Life Tributes page to make it easy to share your memories.

Send flowers to the Lewis, family.