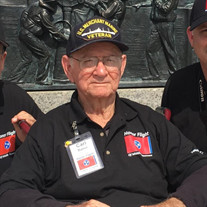 Carl Francis Babin was born in Houma Louisana to Louis Joseph Babin and Mary Valarie (Labit) Babin. He died January 25th 2021, 3 days past his 96th birthday, due to a fall in his home. Carl is predeceased by Mary Elizabeth (Hastings)Babin, died 7-26-2002 his wife of over fifty years and Kathleen (Mathis) Babin. Also his older sister Earline (Babin) Murrell of Louisiana. Carl leaves behind his sister Maureen (Babin) Smith of Missouri, 7 nephews and 6 nieces. Carl learned the value of work as a teenager delivering newspapers on his Schwinn bicycle that he bought himself. After Pearl Harbor he was rated 4f by Selective Service so he volunteered for service in the merchant marines where he was a deck hand on a WWI freighter DC3 USS "Hannay" carrying needed supplies to ports in Europe. He was separated on 9-5-1945. But jobs were scarce so he enlisted in the Army from June 1946 to November 1947. He was stationed on a "Liberty Ship" delivering goods to an island near Korea. Later working for oil companies off-shore in Louisiana and for the Southern Bell Company in Louisiana. Moving to Nashville to study diesel mechanics on the GI Bill but found a wife instead. They were married in the early 1950's.He got a job for S.E. Bell in Tennessee and worked there as a cable splicer until retirement. In retirement he enjoyed winters in Florida in their motor home and traveling with other RV'ers to Jamborees. The family is deeply indebted to his friends Debbie Hunt and Kenny Reader who looked after him these last few years. His last vacation was the "Veterans Honor Flight" in 2018 with two of his nephews. He wore the cap proudly! Visitation for Carl will be held on Friday, January 29, 2021 from Noon until 2:00 at which time a Celebration of Life Funeral Service will be conducted from the chapel of Spring Hill Funeral Home, 5110 Gallatin Road, Nashville, TN, 37216. Burial will follow in Historic Spring Hill Cemetery. Arrangements by Spring Hill Funeral Home and Cemetery, a Nashville landmark since 1785 "Where Nashville Comes to Remember"

Carl Francis Babin was born in Houma Louisana to Louis Joseph Babin and Mary Valarie (Labit) Babin. He died January 25th 2021, 3 days past his 96th birthday, due to a fall in his home. Carl is predeceased by Mary Elizabeth (Hastings)Babin, died... View Obituary & Service Information

The family of Mr. Carl F. Babin created this Life Tributes page to make it easy to share your memories.

Send flowers to the Babin family.