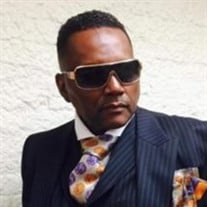 Dillard “D” David Osborne Douglas, 66, was born January 13, 1954 in Galesburg, IL to the union of Dillard and Louise (Hall). On November 2, 2020, he died peacefully at his home in Gallatin, TN, after a courageous battle with cancer. In 1975, “D” enlisted in the U.S. Army, where he served for 4 years, which included a tour in Stuttgart, Germany. In 1983, he began attending University of Northern Iowa (UNI). At UNI, two colleagues were persistent in preaching the Gospel to him. Unbeknownst to them, they were planting seeds that eventually led “D” to the saving knowledge of Jesus Christ. On December 16, 1983 at 11:30 p.m., “D” fell on his knees and cried out to the Lord to take over his life and change him. Using the acronym for Let God Use You, “D” founded L’GUY Apparel in February of 2000, premiering at the 35th Annual Gospel Music Worship of America (GMWA) Convention in Detroit, Michigan. The GWMA organization, many of its members, and gospel music recording artists became L’GUY’s greatest supporters. “D” met his wife Regina in February of 2001 and they were married in May of 2002. In 2003 Pastor Robert Harrison Scales, III, became “D” and Regina’s spiritual counselor and pastor. Pastor Scales imparted to “D” the importance of making John 13:34 his LIFE and not just a religious ritual. The need to love and forgive everyone in the same way Jesus Christ forgave on the cross is the key. Because of the wisdom and spiritual example of Pastor Scales, “D” truly surrendered his heart, and his life was truly changed by the mighty Power and love of the Lord Jesus Christ. “D” is preceded in death by his parents, sisters, Merio, Carol Ann, Valerie, and Terri. He is survived by Regina, his loving wife of almost 19 years; his children, Makaii Douglas of Stugart, Germany, Marquise Douglas of Riverhead, NY; granddaughter Melanie Douglas; sisters, Cynthia (Wickie) Lyons of Fredericksburg, VA., Beverly Douglas of Bronx, NY, Angela "Tina" Douglas of Mt. Juliet, TN. The only Uncle to his numerous nieces and nephews and his special church loved ones, Akilah Gupton, Ellanie Roberts, Lillian Beasley, Savannah Thompson, and Precious Smith will also forever remember Uncle “D.” A celebration of “D’s” life will be held at Jesus Is The Answer Church, located at 332 Main Street, Watertown, TN, Pastor Robert Scales, officiating. The service will also be streammed live on the church YouTube page and website www.jitachurch.org on Saturday, November 14, 2020 at 11AM CST. Cremation services provided by Spring Hill Funeral Home, 5110 Gallatin Pike, Nashville, TN 37216

The family of Mr. Dillard David Osborne Douglas created this Life Tributes page to make it easy to share your memories.

Send flowers to the Douglas family.