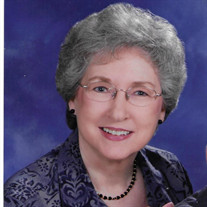 To view the Livestream of Mrs. Horton's Celebration of Life Service, please click HERE Elizabeth Jean Clark Horton, July 6, 1940-January 23, 2022. Jean, beloved by all who knew her, died at the age of 81 after a long battle with dementia. She passed away peacefully early on a bright and sunny Sunday morning, and joyously joined her Father in Heaven. We believe she then ran to the open arms of her dearly beloved husband of 60 years, Leslie (Les), whom she had greatly missed for the past 4 years. Jean was a charter and lifelong member of Dickerson Road Baptist Church where she had attended since she was a young girl. A short distance away was Jean’s childhood home where she lived with her father, mother, and 5 brothers at a time when Madison was considered rural. She attended Stratton School and Madison High School, graduating in 1958. Jean met her future husband through one of her brothers on a double date at Madison Bowling Lanes. Carl Clark introduced Jean to “Horton,” a guy he worked with who he thought a lot of. The attraction between Les and Jean was “at first sight” and from the beginning, they were practically inseparable. On December 28, 1957, they were married at Dickerson Road Baptist Church. Jean was a beacon of light and love. She bestowed her ever-present, beaming smile on everyone fortunate enough to know her. Her true happiness was her home life and her family. Some of her favorite moments were teaching her granddaughters the art of embroidery, pitching ball with her grandsons, and hiding countless Easter eggs in the backyard. Along with Les, they attended every school function for their children and grandchildren, including every single Grandparents Day for over 12 years. And if you were having surgery or a procedure done, don’t be surprised to see Les and Jean coming through the doors all neatly dressed, even at 5:00 am, with big smiles on their faces to offer you moral support. In 1970 Jean took a secretarial job at Modern Home Improvement Company. It was supposed to be a short-term job as she was only going to work to pay for her daughter’s braces. But she loved the job and the people she worked for, and the job turned into a permanent position, and she ended up staying for 31 years! She retired as office manager when the business closed following the 9/11 tragedy in 2001. Jean is survived by her daughter and son-in-law Donna and Don Raymond; son and daughter-in-law Mark and Sandra Horton; grandchildren Allyson, Stefanie, Jason (Anna), and Bryan Raymond; Tabitha Downs; great-grandchildren Trenton Dodson and Saylor Allen; brothers Doyle (Sue), Earl (Paulette), and David (Pat) Clark; sisters-in-law Mary M. Horton, Janet Clark, and Gladys Clark, numerous cousins, nieces and nephews, and her much loved and devoted cat, Johnny. Jean was preceded in death by her husband, Leslie Allen Horton, who died in November 2017. She was also preceded in death by her parents, Ralph Taylor Clark and Ellie LaRue Webb Clark, her (infant) twin sister, Irene, and her brothers Raymond (Gladys) and Carl (Janet) Clark, Visitation will be held on Sunday, January 30, 2022, from 11 am-1 pm. Service will follow beginning at 1 pm in the Chapel at Spring Hill Funeral Home, 5110 Gallatin Pike, Nashville, with her brother, Reverend David Clark officiating. Pallbearers will be son-in-law, Don Raymond, grandsons, Jason Raymond and Bryan Raymond, and nephews, Jeffrey Horton, Matthew Horton, Zachary Horton, and Charles Carroll. Burial will follow at Burns Family Cemetery in Rockvale, Tennessee. The family thanks NHC The Place at the Trace. In particular, they wish to recognize the superb staffs of Nursing, Tech, Rehab, and Social Services for their devotion and unwavering care of Jean. Flowers accepted or memorials may be made in Jean’s name to the Alzheimer’s Association or the American Heart Association.

The family of Mrs. Elizabeth Jean Clark Horton created this Life Tributes page to make it easy to share your memories.

To view the Livestream of Mrs. Horton&#39;s Celebration of Life Service,...

Send flowers to the Horton family.