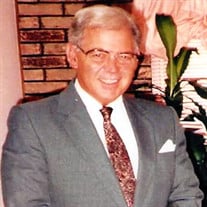 Harry Warren “Skeeter” Bolin, 84, of Nashville, Tennessee, passed away on Wednesday, March 2, 2022. Born July 9, 1937, in Franklin, Tennessee, he was the son of the late Harry Buford Bolin of Franklin, Tennessee, and Donna Virginia Britt Bolin of East Nashville. Mr. Bolin attended and graduated from Donelson High School and immediately after graduation entered the U.S. Navy for eight years. He served on the U.S.S. Modregal (SS 480), a diesel-powered submarine and then various duties throughout WestPac and is a Vietnam Veteran. He spent most of his post military service, a 40-year career, with 3M Company, the final 20 years prior to retirement in Chicago, Illinois, serving ultimately as Executive Director of Manufacturing and Operations. He retired December 31, 1997 and moved back to Nashville one year later. In addition to his parents, he was preceded in death by Mary Beatrice “Bea” Swift Bolin, of East Nashville (Isaac Litton and Donelson High Schools), who was a treasure on this earth, and the love of his life and the light of his life; a step daughter Leah Lisa Tubb; and his in-laws Herman and Helen Swift of East Nashville and Donelson. Mr. Bolin is survived by three sons, Joseph Stephen, Joseph Warren and Timothy Andrew; stepdaughters Janalyn (Punkin) and Holly Jo; six granddaughters Alex, Britt, Lacy, Lauren, Haley and Emily; step granddaughter Lacy Lanier; stepson Devin Bornstien. Visitation will take place from 12:00 pm until 2:00 pm at Spring Hill Funeral Home in Nashville on Friday, March 11, 2022. At 2 pm there will be a Service of Remembrance. Inurnment with Navy Military Honors will follow in the Historic Spring Hill Cemetery alongside his beloved Mary Bea. In lieu of flowers, the Bolin family has asked that donations be made in Harry’s name to the Nashville Rescue Mission. Arrangements entrusted to Spring Hill Funeral Home & Cemetery, 5110 Gallatin Road, Nashville, TN 37216.