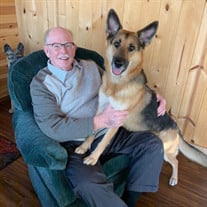 James Peter Hanno (Jim) passed away Sunday, April 10th 2022 in Nashville, TN on his way to his Florida retirement home. He passed away due to cardiac arrest. A celebration of his life will be held 1-4 pm Saturday April 30th, 2022, at the Family Dog Center, N3089 State Hwy 16, Lacrosse, WI. Jim was born in Chicago, IL on December 20, 1948 to Anne Phelan and Marshall Hanno Sr. He grew up and graduated from Bogan High School. He was involved in the TeleCommunications industry for more than 20 years. He married Sherri Davis (later divorced). They raised their two children, Greg and Jamie in La Crescent, MN. He was proud of being an active Brother of Shriners International, served on the Apple Fest Board, and enjoyed trail riding and competing in horse shows with Greg and Jamie. Through his love and involvement for horses and dogs, he met Laurie Haake. They continued to be involved in horses, including with the Senior Pro Rodeo in Reno as Event Coordinator. He traveled internationally as a TeleCommunications Consultant until the early 2000’s. He and Laurie founded the Family Dog Center together in 2001 which he designed and built. This was one of his proudest accomplishments. Everyone knew Jim for his upbeat personality. He invented a new era of dog shows as Family Dog Center was know as the “fun place” attracting competitors from many states. Jim enjoyed many good years and times with his Floridian friends at his place in Paradise RV Resort in Punta Gorda, FL. While there his first year he began to foster dogs for the German Shepherd Rescue Organization where he adopted Kia. She instantly stole his heart and they had been inseparable ever since, even saving his life multiple times. Jim loved spending time with his family and grandkids. He had a special way of making everyone laugh with his funny stories, jokes and quick wit and antics. He loved making people feel good Jim is survived by his partner, Laurie Haake, his children: Jamie and Greg (Tammy) Hanno, his Bonus children by Laurie Haake: Jenny (Brandon) Conard, Niki (Jared) Sanness, and Justin Haake. He was adored by grandchildren, MacKenzie and Zach Hanno, Emmy and Brielle Conard, Brayden and Addison Sanness, Wyatt and Izabelle Haake as well as brothers Marshall (Lori) Hanno Jr, Tom (Eileen) and Jack Hanno and sister Diane Hanno many nieces and nephews as well as his beloved dog Kia. Jim was preceded in death by his parents Anne and Marshall Sr. Hanno. In lieu of flowers, donations can be made to Paradise RV Resort or German Shepherd Rescue of Florida.

James Peter Hanno (Jim) passed away Sunday, April 10th 2022 in Nashville, TN on his way to his Florida retirement home. He passed away due to cardiac arrest. A celebration of his life will be held 1-4 pm Saturday April 30th, 2022, at the Family... View Obituary & Service Information

The family of James Peter Hanno created this Life Tributes page to make it easy to share your memories.

Send flowers to the Hanno family.