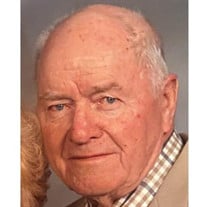 To view the LiveStream of the service on Thursday, January 21, 2021 at 1 PM, please click HERE Joe Willoughby Pirtle - devoted family man and US Navy veteran - passed away January 13, 2021, surrounded by his loving wife and children. Born on April Fool’s Day, 1932, Joe was no fool but a natural entertainer. Anyone who had the privilege to know him would describe him as the best there was at holding court, regaling anyone who would listen (and some who’d rather not) with his stories and wisdom. He was the life of any party and those in attendance sat in silence, apart from the sudden outbursts of laughter, listening, hanging on every word as one tale led to another. Joe was born the third of eight children to Sam and Letitia Pirtle of Nashville, TN. Lovingly nicknamed “Joe Wee” by his mother and oldest sister, he was revered for his rock solid steadiness and gentleness. He felt a deep sense of responsibility for his entire family. According to his siblings, Joe was his daddy’s favorite and provided a sense of security as he was the first call for anyone who met trouble. Joe attended East High School in the late 1940’s, where he fell in love with Peggy Joyce Power, his beautiful “lil’ red-headed ‘shug’ with blue bows in her hair to match her sweater”. Love at first sight, the pair were married March 25, 1953 for nearly 68 years. Joe and Peggy were blessed with three children and three grandchildren and never missed an opportunity to boast of their accomplishments. He also found great honor in his name-sake, Sophie Jo, his first of two great grandchildren. He took pride providing for his family as a self-employed roofer and craftsman. Joe was a hard working man and his weathered hands told a story of perseverance and devotion that will be remembered for generations to come. Joe was the ultimate sportsman. In high school, he was a natural on the basketball court and baseball field. He coached ball teams year after year, mentoring many young athletes. A master of everything he touched, Joe was better than most at hunting, fishing, and golfing. Many days he could be found at Shelby Golf Course, waiting for an associate to offer a worthy challenge he was sure to win. Hunting, a pastime he enjoyed with his father, uncles, and brothers, was something he spent thousands of hours sharing with his sons and grandson. Joe was a US Navy veteran, serving as a Damage Controlman on the USS Thompson, from 1951-1955. He expressed his love for that ship and his service proudly, rarely being seen without a hat honoring his time spent in the Navy. Later in life, Joe was able to reconnect with shipmates and greatly enjoyed attending and hosting naval reunions. He testified of God’s grace and purpose for his life, telling of the time he reluctantly followed orders to leave his post on the fly bridge mere moments before shore artillery hit the exact spot he would have been standing. After four years, Joe declined a career in the US Navy, returned home and created a beautiful life. Joe is survived by his wife Peggy; his son and daughter-in-law Steve and Nancy; son Brad; daughter and son-in-law Cheri and Bobby Potts; granddaughter and grandson-in-law Cheryl and Chad Carter; grandson and granddaughter-in-law Noah and Sara; granddaughter Kayla Potts; great granddaughter Sophie Jo Carter; great grandson Easton Carter; brother Aaron “Honkie” (Judy); sisters Judy Knight and Brenda Walden; and sister-in-law Hazel. He is preceded in death by his brothers Sam Jr and Phillip; sister Helen; and sister Marilyn Bearden (Frank). The family would like to thank the trauma team at Vanderbilt Medical Center for their compassionate care for Joe and his family. Visitation with family will be at Spring Hill Funeral Home, Madison TN, January 20, 2021, 2-8pm, Thursday January 21, 2021, 11-1pm followed by a celebration of life and burial. In lieu of flowers, please consider a tribute donation to Greenbrier First Baptist Church, 204 W. Smith St., Greenbrier, TN 37073. Spring Hill Funeral Home & Cemetery, 5110 Gallatin Road, Nashville, TN 37216 has been entrusted with the care of Mr. Pirtle.

The family of Mr. Joe W. Pirtle created this Life Tributes page to make it easy to share your memories.

To view the LiveStream of the service on Thursday, January 21,...

Send flowers to the Pirtle family.