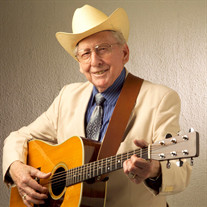 JOHN RAY “CURLY” SECKLER December 25, 1919 – December 27, 2017 John Ray “Curly” Seckler, age 98, of Hendersonville passed away on Wednesday, December 27 after a short illness. Seckler was born on December 25, 1919 on a farm near China Grove in Rowan County, North Carolina. He was the fourth of eight children born to Calvin and Carrie Sechler (he later changed the spelling of his last name to avoid mispronunciation). At age fifteen, Seckler embarked on a long career in country music, performing initially in a band called the Yodeling Rangers, along with his brothers Marvin, George, and Duard. He went on to work several stints with Charlie Monroe & the Kentucky Partners, making his first recordings with Monroe in 1946. He also teamed early in his career with bluegrass pioneers Mac Wiseman, Jim and Jesse McReynolds, the Sauceman Brothers, and the Stanley Brothers. In March of 1949, Seckler joined the iconic band, Lester Flatt, Earl Scruggs and Foggy Mountain Boys, as tenor singer and mandolin player. Except for a couple of brief absences, he remained with the group until 1962, recording over 130 songs with them, including many of their most popular hits. By 1955, Flatt & Scruggs were members of the Grand Ole Opry, with a series of live television programs in multiple markets around the southeast. The band was in such demand that they often worked seven days a week, traveling thousands of miles. Seckler left the music business briefly during the 1960s, working as a truck driver. He joined Lester Flatt’s Nashville Grass in 1973 and, following Flatt’s death in 1979, took over leadership of the Nashville Grass until retiring from touring in 1994. He continued to make appearances at festivals and concerts, and remained a vital and creative entertainer into his nineties. Seckler is regarded as one of the greatest tenor singers ever in bluegrass, and in 2004 he was inducted into the IBMA Hall of Fame. He was inducted into the North Carolina Music Hall of Fame in 2010, and into the Bill Monroe Bluegrass Hall of Fame in 2011. His biography, Foggy Mountain Troubadour: The Life and Music of Curly Seckler, was published in May 2016 by the University of Illinois Press. He continued to enjoy listening to bluegrass music and reminiscing about his days on the road up until his death. Seckler was an engaging storyteller who always made himself accessible to his fans, He was a loving husband and parent and a loyal and generous friend. A man of great faith, he was a member of Holiday Heights Baptist Church. Seckler was preceded in death by his parents Calvin and Carrie Sechler; sisters Myrtle Barnhardt, Ethel Jackson, Claire Sloop, Mary Freeze, and Ruth Speck; brothers Roy, Marvin, George, and Duard; and granddaughter Carrie Seckler. He is survived by his wife of nineteen years, Eloise Warren Seckler; his brothers Floyd Sechler and Hugh Sechler (Doris); his sons Ray Seckler and Monnie Sechler (Brenda); stepchildren whom he loved as his own, Gary Warren (Dara), Johnny Warren and Debbie Frazier (Bob); grandchildren Jeffrey Sechler (Cheryl), Terry Sechler (Tina), and John Sechler (Connie); grandaughters Sherry Evans (Steve), Charity Seckler, and Melissa Merritt (James); twelve great grandchildren, three great great grandchildren, and special friend Penny Parsons. Funeral services will be held at 1:00 pm on Monday, January 1, 2018 at Spring Hill Funeral Home in Nashville. Burial will follow at Forest Lawn Memorial Gardens in Goodlettsville. The family will receive friends from 1:00 to 5:00 pm on Sunday, December 31 and from 12:00 to 1:00 pm on Monday, January 1 at Spring Hill Funeral Home.   Condolences may be made online at http://www.springhillfh.com.  Spring Hill Funeral Home is in charge of arrangements.

The family of Mr. John "Curly" Seckler created this Life Tributes page to make it easy to share your memories.

Send flowers to the Seckler family.