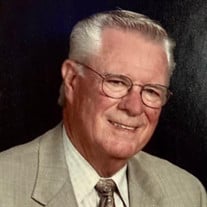 To view the live stream click here Kenneth Henshaw, Age 86, of Hendersonville, TN died on July 6, 2020. He was born on September 3, 1933 in Estill Fork, Alabama the son of Orville and Jessie (Reid) Henshaw both of whom preceded him in death. Kenneth served in the United States Air Force from 1957 until 1961, although he didn’t talk about his service often, he was proud of his time spent in the military. Kenneth met the love of his life in Fortuna, North Dakota while he was stationed there and together they started a family and were married for 61 years. He was the president of Wynn & Graff Incorporated and worked there for over 25 years. Kenneth loved to travel with his family, throughout his life he was able to travel to every state and loved traveling to Hawaii most of all. He was an elder of the Good Shephard United Methodist Church in Hendersonville and assisted in designing the new church before it was built. Kenneth was passionate about sports, he loved Vanderbilt Basketball, NFL and Alabama Football. He was also a very generous and giving man who would assist anyone who needed help no matter who it was. Kenneth is survived by his wife of 61 years Beryle Henshaw; his children Steve Hughes (Cindy), Jim Henshaw (LeeAnn), Randy Henshaw (Tonya); grandchildren Brian Henshaw, Amie Koivu, Erica Casey, Tiffany Burleson, Tara Goetz; Great Grandchildren Josh, Blake, Caylee, Hannah, Grace, Emma, Deklane, Eli, Robert, Ellie, Noah, Kobi. He is also survived by his brother Bill Henshaw. He was preceded in death by his sisters Ruby Green, Ruth Embry, Opal Wallace, Orvilline Hatcher, Bobbi Duncan, Nancy Johns and Peggy Slama. Visitation will be held Saturday, July 11, 2020 at Spring Hill Funeral Home and Cemetery at 5110 Gallatin Road, Nashville, TN 37216 from 9-11 AM. Funeral service will be held immediately following at 11 AM in the Spring Hill Funeral Home Chapel. Burial will take in the Historic Spring Hill Cemetery. Arrangements entrusted to Spring Hill Funeral Home & Cemetery, 5110 Gallatin Road, Nashville, TN 37216.

To view the live stream click [here]http://webcast.funeralvue.com/events/embed_viewer/32918 Kenneth Henshaw, Age 86, of Hendersonville, TN died on July 6, 2020. He was born on September 3, 1933 in Estill Fork, Alabama the son of Orville and... View Obituary & Service Information

The family of Mr. Kenneth Henshaw created this Life Tributes page to make it easy to share your memories.

Send flowers to the Henshaw family.