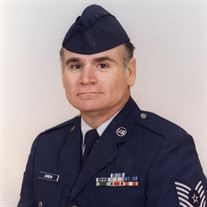 To view the livestream click here Roger Alyn Johnson Sr. was born April 2nd, 1942 in Nashville Tennessee. He was the son of Alyn Doan Johnson and Blanch Marie Edwards. He graduated from East Nashville High School in 1960. He spent 8 years proudly serving his country in the Army and then went on to serve in the Air National Guard as a Loadmaster on the C-130 Hercules. He retired from the printing industry after 50 years in various companies. Roger married Merrie Beth Johnson on November 24th, 1961. He met his wife at the Madison Bowling Alley and from there on out she went to all his sports games and proudly cheered him on in their early years of marriage. He enjoyed numerous sports but especially golfing and bowling. Roger was a jack of all trades from re-modeling his home for his wife to working on cars and being very meticulous about his lawn. As he would say “I’m a jack of all trades, but a master of none”. He was also immensely proud of his grandchildren. Roger is survived by his wife Merrie Beth Johnson of 60 years, his two sons Roger Alyn Johnson Jr. and Jeffery Todd Johnson. His grandchildren Krista, Allyson, Dylan, and Tyler. His great granddaughter Kayleigh. And his sister Marie White. Roger is preceded in death by his father Alyn Doan Johnson and mother Blanch Marie Edwards and his brother Morris Lowery. And not to be forgotten, he is also survived by his beloved dog Tia. Roger's visitation will be held on Tuesday, October 13, 2020 from 9AM-12PM with the Celebration of Life Funeral Ceremony immediately following at 12:00 PM. Burial will take place in the Historic Spring Hill Cemetery.

The family of Mr. Roger Johnson created this Life Tributes page to make it easy to share your memories.

Send flowers to the Johnson family.