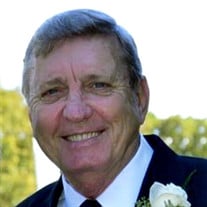 Terry Wayne Oldham,“Gumpy," 74, went home to be with the Lord in the early morning of Sunday, December 10th, 2017 with family by his side. Born on November 17, 1943, he was the youngest son of Ruby and Ted “Smiley” Oldham and step-father Ralph Drake (all deceased.) Also preceded in death by his daughter, Michele Oldham. He is survived by his wife of 34 years, Molly Oldham, brothers Roland Oldham (Mariko), Tommy Oldham (Kim), and two sisters Nancy Drake Vance and Susan Drake. He is survived by his children Jennifer (Oldham) Lanius, Bill Ferguson, Amber Willis (Allen), David Ferguson, Scarlett Smith (Raymond), Billie Carolyn Lowe (Bill), and Deanna Hernandez (Bobby). He is survived by his grandchildren Molly Willis Hyde, Allen P. Willis (Jessica), Ethan Willis (Katherine), Eric Willis (Grace), Spencer McAllister (Stacie), Ian McAllister, Tiffany Smith, Mandi Fox (Steven Greene), Jacob Lommer (Danielle Sain), Mary Levan (Sean), Anna Belle Lowe, Vincent McQuillen, (Lindsay) and Montgomery Lanius. He is also survived by fourteen great-grand children. Terry was a well - rounded man. He served honorably in the United States Marine Corps as a helicopter crew chief reaching the rank of Sergeant. He was a decorated Marine serving during the Vietnam War where he received a Bronze Star Medal with Combat "V", a Gold Star and an Air Strike Medal all for heroic achievement in Vietnam. He worked at Drake’s Ceramics in Nashville with his mother, Ruby Drake, for over 20 years. He was a talented artist and very creative. He dabbled in entrepreneurship by painting and selling beautiful ceramic bowls and pitchers. He later worked at Drake Hardware in Nashville and Home Depot in Madison where he delighted in helping people solve their plumbing woes. He cherished the people he worked with and sincerely looked forward to going to work. He was quick-witted and had a contagious sense of humor and would brighten anyone’s day with a joke or a turn of a phrase. He was an avid fisherman who loved being on the lake. Although he was a skilled fisherman, you could always count on a tall tale or two. He also took pleasure in cooking, often trying new recipes in his beloved InstantPot. He was a budding horticulturalist and fragrant roses were among his favorites. And best of all, he was a lover and follower of God, and although he loved his life here, he looked forward to being with the Lord. Proverbs 8:17 I love those who love me, and those who seek me diligently find me. Pallbearers are Roland Oldham, Tommy Oldham, Jacob Lommer, Richard Lanius, Vincent McQuillen and Montgomery Lanius.

The family of Mr. Terry Wayne Oldham created this Life Tributes page to make it easy to share your memories.

Send flowers to the Oldham family.