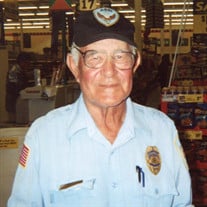 Mr. Willie Lee Malone, Jr., age 94 of Nashville, Tennessee passed away on the morning of May 25, 2021. He was born on February 5, 1927 in Cornersville, Tennessee to the late Willie Lee Malone, Sr. and Christine Crawford Malone. In addition to his parents, he was preceded in death by his brother Bobby Malone. He is survived by his children Ralph “Eddie” Malone (Kathy) and Larry Keith Malone (Tiffany), sister Beverly McClain, and grandchildren Bryan, Zack, Breezy, Eason, Parker, and R.J. Malone. Willie Malone was born during the Great Depression and like most people who grew up during that time, he was forced by necessity to be resourceful and learn many skills. Growing up, he and his brother and father were loggers during the Winter months, and would farm and build homes during the summer months. Once he got older, Willie joined the United States Army, and proudly served his country for many years during World War II and The Korean War. During this time, Willie was able to travel outside the United States for the first time, and see Europe. As a little country boy from Tennessee, he was fascinated by all he saw and experienced in Europe, and even went skiing in Austria! Willie was incredibly active his whole life. From his experience logging as a boy, you could find him shimmying up trees into his seventies, fixing things, building things, working in the garden, you name it. When he was 64, he and Eddie built an entire house from the ground up. Willie was a very special and kind person. He would do anything for anyone, and he will be greatly missed by all who knew him. Willie’s motto was, “Put one foot in front of the other, and keep going.” It was Willie’s request that there be no formal services held. Spring Hill Funeral Home and Cemetery has been entrusted with the final care of Mr. Malone. 5110 Gallatin Road, Nashville, Tennessee 37216. (615) 865-1101. “Where Nashville Comes to Remember.”

The family of Mr. Willie Lee Malone Jr created this Life Tributes page to make it easy to share your memories.

Send flowers to the Malone family.